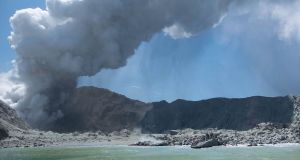 A photograph courtesy of Michael Schade, an engineering manager from San Francisco who was one of the tourists who made it off the island just before the eruption. It shows the volcano on New Zealand’s White Island spewing steam and ash minutes after an eruption on Monday. Photograph: Michael Schade/AFP/Getty

New Zealand said on Tuesday that eight people were missing and presumed dead a day after a volcano erupted off the coast of New Zealand’s North Island, with at least five people confirmed dead and more than 30 injured.

Prime minister Jacinda Ardern told reporters that aerial reconnaissance flights did not show any signs of life on the volcanic White Island after the eruption that spewed a plume of ash thousands of feet into the air.

“To those who have lost or are missing family and friends, we share in your unfathomable grief in this moment at time and in your sorrow,” she said at a news conference in Whakatane, a town near the tourist attraction.

New Zealanders and tourists from Australia, the United States, Britain, China and Malaysia were among the missing and injured, she said, without giving more details.

Australian prime minister Scott Morrison said on Tuesday three Australians were feared to be among the confirmed fatalities, with 13 among the injured.

“I fear there is worse news to come,” Mr Morrison said.

Ms Ardern said there had been two explosions in quick succession.

Many of the injured were in critical condition, most with burns, Ms Ardern said. Police said they did not expect to find any more survivors.

White Island is about 50km (30 miles) from the east coast of North Island, and huge plumes of smoke and ash were visible from the mainland. Volcanologists said the plume shot 12,000ft (3,658m) into the air.

Waikato Police Supt Bruce Bird said 47 people visited the island on Monday – five were confirmed to have been killed and eight were missing. Some 31 were in hospital and three had been discharged.

Ms Ardern said authorities were still assessing how close rescuers can get to the island.

“Ash is obviously significant,” she said. “We’ve heard reports of one boat returning with up to half a metre of ash, so the ashfall is significant and that will be having an impact.”

‘Whakaari’, as it is known in the Maori language, is New Zealand’s most-active cone volcano, built up by continuous volcanic activity over the past 150,000 years, according to New Zealand science agency GeoNet.

About 70 per cent is under the sea, making the massive volcanic structure the largest in New Zealand.

Ray Cas, a professor emeritus at Monash University, said the island “has been a disaster waiting to happen for many years”.

“Having visited it twice, I have always felt that it was too dangerous to allow the daily tour groups that visit the uninhabited island volcano by boat and helicopter,” Mr Cas said in comments published by the Australian Science Media Centre.

The volcano’s last fatal eruption was in 1914, when it killed 12 sulphur miners. There was a short-lived eruption in April 2016.

GeoNet raised the alert level for the White Island volcano in November because of an increase in volcanic activity.

The daily tours bring more than 10,000 visitors to the volcano every year. One from a 16-deck cruise liner, Ovation of the Seas, was there at the time.

Janet Urey (61), a nurse from Richmond, Virginia, said her son Matthew (36), was injured in the eruption while on honeymoon.

“The phone rang at midnight. Then I heard a voicemail come on. It was my son. He said, ‘Mom ... this is not a joke. A volcano erupted while we were on the island. We’re at the hospital with severe burns.’”

She has been frustrated by the lack of information from the cruise ship he was on and from authorities.

“I have not heard a word from the cruise people. I just want the word out there. I’m not really happy with how this has been handled,” she added.

A crater rim camera owned and operated by GeoNet showed groups of people walking towards and away from the rim inside the crater, from which white vapour constantly billows, in the hour leading up to the eruption.

Michael Schade, an engineering manager from San Francisco, was one of the tourists who made it off the island just before the eruption.

“This is so hard to believe,” Mr Schade said in a video posted on Twitter as he sped away from the island by boat. “Our whole tour group were literally standing at the edge of the main crater not 30 minutes before.”

“I want to acknowledge the courageous decision made by first responders and those pilots who in the immediate rescue effort made an incredibly brave decision under extraordinarily dangerous circumstances in an attempt to get people out,” she said. – Reuters