Two killed as thousands protest in India against citizenship Bill 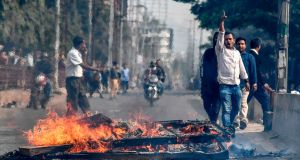 Demonstrators shout slogans next to a burning barricade during a protest against the Indian government’s Citizenship Amendment Bill in Guwahati on Thursday. Photograph: Biju Boro/AFP via Getty Images

Army troops have been deployed across India’s northeastern region against thousands of demonstrators, who defied curfew, burnt buses and cars and attacked trains in protest against the federal government’s contentious citizenship Bill, which was cleared by parliament on Wednesday.

Two protesters died in clashes with police in Guwahati, a city in the north-eastern state of Assam. Police said they had been caught in crossfire.

Commercial flights to Assam were suspended, while train and taxi services across the region remained disrupted, leaving thousands of commuters stranded.

“Nothing is working,” Roshni Goawami, a stranded passenger in Assam’s main city of Guwahati, told the NDTV news channel.

Media reports from the region claimed that even Assam chief minister Sarbnanda Sonowal was stranded at the airport for several hours, before police cleared all approach roads of protesters.

They claimed the Bill, which offers Indian citizenship to all non-Muslim illegal immigrants from neighbouring Islamic countries such as Afghanistan, Bangladesh and Pakistan, will open their region to a flood of migrants from adjoining Bangladesh.

Many told television news channels that these outsiders would seize their jobs, populate their lands, upset the region’s demographic profile and subsume their language and culture.

A movement against illegal migrants has simmered in Assam, known for its world famous tea, and in Tripura, for several decades, often becoming violent.

Critics of the Bill such as opposition MPs, jurists and activists said it discriminated against Muslims and abrogated India’s secular constitution, by granting citizenship on the basis of religion. The main opposition Congress Party is challenging the Bill in India’s supreme court.

The Bill also has an impact on India’s international relations, with Bangladesh foreign minister A K Abdul Momen cancelling a planned trip to New Delhi for a summit on the Indian Ocean.

A day earlier Mr Momen had questioned the citizenship Bill, declaring that it could “weaken” India’s historic secularity and rejecting the BJP government’s allegations that minority communities faced religious prosecution in Bangladesh.

India’s foreign ministry spokesman, however, said that Mr Momen had cancelled his visit due to “domestic reasons”.

The turmoil in Assam also comes days ahead of a December 15th summit Mr Modi plans to host there for Japanese prime minister Shinzo Abe as part of his wider campaign to move high profile visits by foreign leaders away from Delhi with a view to showcasing India’s diversity.

The foreign ministry spokesman in Delhi said he had no information on whether the Modi-Abe summit would take place as scheduled in Assam.

Mr Modi, meanwhile, has called for calm in Assam and assured its residents that no one will take away their rights, identity and culture under as a consequence of the citizenship Bill.

But few in either Assam or Tripura are calmed by his assertions.