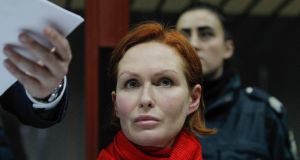 Suspect Yulia Kuzmenko at a court hearing in Kiev over the murder of Pavel Sheremet. Photograph: Stepan Franko/EPA

Suspects in the 2016 murder of journalist Pavel Sheremet have denied any involvement in the killing, as relief over long-awaited progress in the case mingled with questions over the allegations and continuing mystery over who ordered the killing.

Mr Sheremet died when a bomb attached to his car exploded as he drove through central Kiev to his morning radio show, and Ukraine’s then president Petro Poroshenko called it a “matter of honour” that the killers be caught.

As with many high-profile cases in Ukraine, however, the investigation appeared to stall and activists and former colleagues of Mr Sheremet expressed grave doubts over the authorities’ willingness and ability to find the culprits.

Ukraine’s new president, Volodymyr Zelenskiy, and his government vowed to drive the investigation forward this year, however. On Thursday, he attended a briefing at which top law-enforcement officials revealed a breakthrough in the case.

Prosecutors say the bomb was planted by soldier and rock musician Andriy Antonenko and paediatric surgeon Yulia Kuzmenko, and that three other current or former soldiers were their accomplices: Yana Dugar and husband and wife Vladyslav and Inna Hryshchenko.

The five suspects have all fought or helped as volunteers in Ukraine’s five-year war with Russian-led separatists, and all deny any role in the murder.

According to documents posted on social media by Vlad Dobos, a lawyer for Ms Kuzmenko, investigators believe Mr Antonenko held extreme far-right views and recruited likeminded people with experience in the war zone to carry out a murder that would “draw attention to national-radical ideas which, in their view, could change the life of society”.

Deputy national police chief Yevhen Koval said investigators had looked at several possible motives but concluded the group sought the “destabilisation of the sociopolitical situation in the state through the murder of a famous person”.

Yet some Ukrainian commentators demanded to know why they allegedly targeted Mr Sheremet as a victim whose death could cause chaos, who funded the murder plot and how the suspects escaped arrest for more than three years.

A Kiev court placed Ms Dugar under house arrest and was due to decide on pre-trial terms for Mr Antonenko and Ms Kuzmenko later on Friday. The Hryshchenkos are already in detention on suspicion of involvement in a separate, failed 2018 murder plot.

Ms Kuzmenko told the court she had not even heard of Mr Sheremet until she read about his death, and said the allegations would wreck her career as a surgeon.

“The only thing I’m really scared of is that innocent people will suffer,” Mr Sheremet’s mother, Lyudmila, told Radio Free Europe on Friday.

“You can’t bring Pavel back . . . Of course, we want the truth. But how close we have got to it is very hard to tell.”