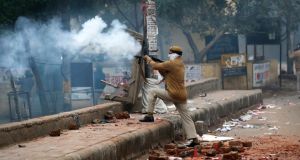 A policeman fires a teargas shell during a protest against a new citizenship law at the Seelampur area of New Delhi, India on Tuesday. Photograph: Manish Swarup/AP

India’s controversial Citizenship Amendment Act has not only triggered violent protests across the country, but also adversely impacted New Delhi’s diplomatic ties with its neighbours, other countries and international organisations.

In its immediate neighbourhood, Afghanistan and Bangladesh have taken strong exception to India offering citizenship under the new law only to “persecuted” non-Muslim minorities like Hindus, Sikhs, Buddhists and Christians from both countries.

Two Bangladeshi ministers including foreign minister A K Abdul Momen cancelled their India visit after the citizenship Bill was passed in parliament last week, while Afghanistan took umbrage over New Delhi’s notions that it victimised its small Sikh community.

“In the last few years, since the fall of the Taliban, our government has been respecting minorities like Sikhs,” Afghanistan’s ambassador to India Tahir Qadiry said in an interview with the India Today TV news channel.

He added that Sikhs had seats in both houses of parliament and were represented at the presidential palace.

Afghanistan has about 3,000 Sikhs who are principally traders and have been living there for generations, but some migrated to India during Taliban rule in the 1990s.

“In the pitiless world of diplomacy we may estimate that small countries like Afghanistan have no option but to co-operate with big donors like India,” said M K Bhadrakumar, India’s former ambassador to Turkey and Uzbekistan.

It said on Tuesday that the BJP’s anti-Islamic policies could drive millions of Muslims from India into Pakistan, thereby generating a refugee crisis for Islamabad. India has the world’s second largest Muslim population, numbering about 200 million.

“We are worried there not only could be a refugee crisis, we are worried it could lead to a conflict between the two nuclear-armed countries,” Pakistani prime minister Imran Khan told the newly formed Global Forum on Refugees in Geneva.

Another unintended diplomatic consequence of the protests over the new law was the postponement by Japanese prime minister Shinzo Abe of his trip to India for an annual bilateral summit.

Mr Modi had scheduled the meeting with Mr Abe at Guwahati in northeastern Assam state on December 15th, but was forced to call it off as violent protests erupted in the city as locals feared an influx of Hindu refugees from neighbouring Bangladesh.

Indian diplomats in Delhi consider rescheduling Mr Abe’s visit as a big blow to India’s “Look East” policy of attempting to cement close economic and strategic ties with Japan and other southeast Asian nations as a bulwark against China.

Jeremy Laurence, spokesman from the Office of the UN High Commissioner for Human Rights, told journalists in Geneva recently that the CAA appeared to undermine India’s commitment to equality before the law, as enshrined in its constitution.

“All migrants, regardless of their migration status, are entitled to respect, protection and fulfilment of their human rights,” he said.

Two US panels, the Commission on International Religious Freedom and the House Foreign Affairs Committee, also criticised the CAA for undermining the basic tenements of democracy.

“The US and other western powers had come to look upon India as an important democratic partner as a hedge against China’s aggressive power projections in Asia,” said the Times of India in an editorial on Monday. But all that risks coming undone with New Delhi’s moves such as CAA, it added.

Meanwhile, clashes continued in Delhi on Tuesday between thousands of protesters and police as countrywide opposition to the CAA endured.

Cars were damaged and rocks and broken glass littered streets across large parts of the capital, and police fired tear gas shells to control mobs.

Small fires too were visible in portions of the city as demonstrators set tyres and piles of rubbish alight.

Several metro stations in Delhi were shut down and hundreds of police in riot gear and armed with thick bamboo sticks were deployed to deal with protesters.

On Monday protests against the CAA had spread to at least 30 university campuses across India.

Mr Modi, however, remained unrepentant. He told a rally ahead of a state election in eastern India that his political rivals were attempting to mislead students and others to stir up trouble for his government.

“This is guerrilla politics and they [the opposition] should stop it,” he said.