Trump is fourth president in history to face impeachment 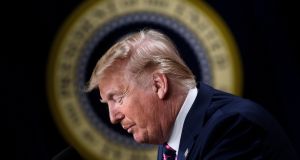 (The US House of Representatives will vote later on Wednesday on articles of impeachment against US president Donald Trump. Photograph: Brendan Smialowski/AFP via Getty Images

US president Donald Trump has denounced the impeachment inquiry as an “illegal, partisan attempted coup” in an extraordinary letter to House speaker Nancy Pelosi on the eve of an impeachment vote scheduled for Wednesday.

The US House is expected to vote to impeach Mr Trump, after the House judiciary committee last week charged the president with two articles of impeachment – abuse of power and obstruction of Congress – over his dealings with Ukraine. If the House votes in favour of impeachment, the process will move to the Senate where a trial is expected in January.

In a strongly worded six page letter to Ms Pelosi on Tuesday, Mr Trump accused Democratic leaders in the House of declaring “open war on American democracy” in moving to impeach him.

“More due process was afforded to those accused in the Salem Witch Trials, ” he declared in the letter, which was littered with his signature punctuation marks. “History will judge you harshly as you proceed with this impeachment charade. Your legacy will be that of turning the House of Representatives from a revered legislative body into a Star Chamber of partisan persecution.”

Ms Pelosi opened an impeachment investigation in September after details surfaced of a phone call between Mr Trump and Ukrainian president Volodymyr Zelenskiy during which he asked his Ukrainian counterpart to do a “favour”.

But Mr Trump in his letter to Ms Pelosi defended the phone call as legitimate. “You know that I had a totally innocent conversation with the president of Ukraine,” he wrote.

As Mr Trump defended his innocence in the letter and in comments to reporters in the White House, the House rules committee sat throughout Tuesday to set the terms and parameters of Wednesday’s vote.

If the House votes to impeach Mr Trump, the process will move to the Senate where a trial is expected in January. A two-third majority is needed to convict a president on impeachment charges, and with Republicans in control of the upper chamber, Mr Trump is not expected to be convicted.

Mr Trump is only the fourth president in US history to face impeachment. Andrew Johnson and Bill Clinton were impeached but cleared by the Senate. Richard Nixon resigned before an impeachment vote was held.

Today’s vote takes place less than three months after Ms Pelosi opened an impeachment inquiry, having resisted calls from some of her party for months to impeach the president over Robert Mueller’s report into Russian interference in the 2016 election. Instead, it was Mr Trump’s dealings with Ukraine that prompted the impeachment inquiry.

Democrats argue Mr Trump committed impeachable offences when he asked the Ukrainian president to do a “favour” in a July 25th phone call. Witnesses during the impeachment inquiry that has taken place since September have testified that Mr Trump and associates mounted a pressure campaign against Ukraine, demanding the new government in Ukraine open two investigations – one into former vice president Joe Biden and his son who served on the board of a Ukrainian company when his father was in office, and another into unconfirmed theories about Ukrainian interference in the 2016 election.

As the United States prepares for the first impeachment vote since Mr Clinton’s was impeached in 1998, an ABC-Washington Post poll found that 49 per cent of Americans believe that Mr Trump should be impeached and removed from office, while 46 per cent are opposed. The result is almost identical to a similar poll at the end of October, suggesting public opinion has not changed much since public impeachment hearings began.

The issue also divides American broadly along party lines: 85 per cent of Democrats believe Mr Trump should be impeached and removed, while 86 per cent of Republicans are opposed.

Tuesday’s House Rules Committee hearings saw legislators from both parties make their case before Wednesday’s vote. In a sometimes rancorous hearing that echoed the committee hearings of recent weeks, Republicans chastised their Democratic counterparts for holding the impeachment vote.

“Democrats in the House have been pushing to impeach Donald Trump before he was even sworn in,” said Republican Tom Cole, accusing Democrats of running “a partisan process that limited the president’s right to due process” and rushing to judge the president “whether the evidence is there or not”.

But the top Democrat on the committee, Jim McGovern, underlined the gravity of what was at stake with the impeachment vote. “It’s up to us to decide whether the United States is still a nation where no one is above the law or whether America is allowed to become a land run by those who act more like kings or queens, as if the law doesn’t apply to them,” he said, describing Mr Trump as a president with a “penchant for cosying up to notorious dictators.”

“The Senate Democratic leader would apparently like our chamber to do the House Democrats’ work for them,” he said on the senate floor. “We don’t create impeachments,” he said, instead arguing it was the job of the House of Representatives. “It’s their duty to investigate, it’s their duty to meet the very high bar to undo a national election.”