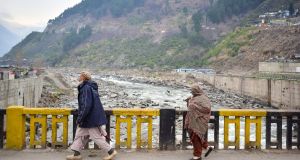 Pakistani residents walk on a bridge in the mountainous area of Balakot where the Indian Air Force launched a raid on Tuesday. Photograph: Getty Images

It was the first such cross-border air attack by India since the two sides fought the third of their four wars in 1971 since independence in 1947.

The attack near the hill town of Balakot, some 50km from the disputed Kashmir border, led to the two sides placing their militaries on “high alert” along their 3,320km border.

Late in the evening the two armies were locked in exchanging mortar and small arms fire along the line of control (LoC) in Kashmir, which divides the state between India and Pakistan – both of which claim it in its entirety.

Pakistan said it would respond at a time and place of its choosing – with a military spokesman alluding to its nuclear arsenal. The spokesman said a command and control authority meeting, which monitors the employment of nuclear weapons, had been convened for Wednesday. “You all know what that means,” he said.

India also blamed the Pakistan military and its Inter Services Intelligence Directorate for supporting the JeM and for planning the attack on the Indian paramilitaries, for which prime minister Narendra Modi vowed punitive action against Islamabad.

Indian foreign secretary Vijay Gokhale told reporters that the “pre-emptive air strike” across the LoC was launched against Pakistan following credible intelligence that the JeM was planning another suicide terror attack in the country.

He claimed that in the intelligence-led operation, India struck the biggest JeM camp in Balakot located in thick forest on a hilltop, eliminating a “very large number of terrorists, trainers, senior commanders and jihadis who were being trained for suicide action”.

Pakistani military confirmed the Indian air force intrusion, but claimed it had successfully thwarted it by scrambling its own fighters.

“Indian aircraft intruded from Muzaffarabad sector,” Pakistani military spokesman Maj Gen Asif Ghafoor tweeted, referring to the capital of Pakistan-administered Kashmir. He said the “timely and effective response from the Pakistan Air Force led to the Indian aircraft releasing their payload in haste while escaping”. No casualties or damage were reported, he added.

Mr Gokhale termed the air strikes a “non-military pre-emptive action” on the grounds that it specifically targeted militant camps and not civilian areas or military cantonments. Indian foreign minister Sushma Swaraj said Delhi’s fight was against terror and not Pakistan.

As well as the attack on its paramilitaries earlier this month, India blames the JeM for the strikes on its parliament in 2001 that led to the two sides mobilising their armies for more than 10 months. The Islamist group was also blamed for assaulting an army camp in Kashmir in 2016 in which 20 soldiers died.

Following that incident, in September 2016 the Indian army carried out strikes against suspected militant camps in Pakistan-administered Kashmir to prevent armed terrorists militants crossing the LoC into India, but these were largely ineffective.

Military sources said the Mirage 2000H aircraft, which were escorted by one airborne early warning and control (AEW&C) aircraft and an Ilyushin-78 mid-air tanker, employed 1,000kg of precision-guided munitions (PGMs) in their strike.

“It easy to start a war, but difficult to control it,” Mr Khan said in response to Mr Modi declaring that India would inflict a “jaw breaking” response from Islamabad for the paramilitary killings. “We will not think of retaliating. We will retaliate,” Mr Khan stated.

The air strike, which took some 10 days of planning by the Indian airforce and other security officials, is expected to boost Mr Modi’s image in India’s upcoming elections, scheduled to be completed before the end of May, provided there is no Pakistani riposte. At an election rally on Tuesday afternoon Mr Modi declared that India was in “safe hands” and that the day of the air strikes would be “immortalised”.

“The attack is bound to show up Modi as a decisive leader who will not compromise with India’s national security,” said military analyst Vijay Kapur, a retired lieutenant general. It would stand Mr Modi in good stead politically, he added.

India immediately undertook a diplomatic initiative to justify the air strikes, with Mr Gokhale meeting with ambassadors of several countries in Delhi.

India and Pakistan have fought two of their three wars since independence over Kashmir.

And in 1999, soon after both became nuclear weapon states, their armies clashed in Kashmir’s Himalayan Kargil region for 11 weeks resulting in 1,200 soldiers dying. The conflict came close to a nuclear exchange that was prevented by US intervention.