Second referendum plan may not get Commons backing 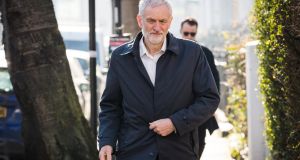 Jeremy Corbyn’s decision to put Labour’s support behind a second referendum on Brexit is an important step towards giving the British people a chance to reconsider their decision to leave the EU. But with the overwhelming majority of Conservatives and a few dozen Labour MPs opposed to a second vote, it will struggle to win a majority in the House of Commons.

Labour’s amendment on a second referendum will not be tabled until March 12th, when Theresa May hopes to bring her Brexit deal back to the Commons for a “meaningful vote”. On Wednesday, MPs will vote on an amendment that would enable them to compel the prime minister to seek an extension to the article 50 negotiating period if she fails to win a majority for her deal by March 14th.

Corbyn said on Monday night that Labour would back that amendment, which also has the support of a number of Conservative MPs including some ministers. Labour will also table an amendment outlining its own Brexit plan, which is all but certain to be defeated.

Speaking to Labour MPs on Monday night, Corbyn pointed out that supporting a second referendum was in line with the policy the party agreed last September. But the Labour leader’s apparent reluctance to implement that policy, which calls for a “public vote” to be considered if all other options had been exhausted, helped to drive eight MPs out of the party into the newly formed Independent Group last week.

Corbyn’s move may have been motivated by the fear that other MPs were preparing to defect to the new group but it also reflects the views of most Labour members and voters. Younger Labour voters and members of Momentum, the grassroots group that supports Corbyn’s leadership, are particularly enthusiastic about a second vote.

And although two out of three Labour MPs represent constituencies that voted Leave in 2016, only a handful are committed Brexiteers and a few dozen are adamant that the referendum result must be respected.

The Labour amendment is likely to be based on one tabled by Labour MPs Peter Kyle and Phil Wilson that calls for the prime minister’s Brexit deal to be put to a confirmatory referendum similar to that which followed the signing of the Belfast Agreement. Senior Labour figures said on Monday night that the choice would be between backing the prime minister’s Brexit deal and remaining in the EU, with Labour backing Remain.