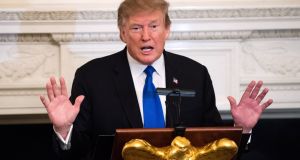 A former staffer on Donald Trump’s presidential campaign has filed a federal lawsuit against the president, claiming he kissed her without consent.

Alva Johnson, who was director of outreach and coalitions in Alabama in 2016, said in the federal lawsuit that Mr Trump made the nonconsensual advance on August 24th, 2016 in Tampa, Florida.

Ms Johnson said Mr Trump “grasped her hand and did not let go” and kissed her on the corner of her mouth as she turned slightly away when she saw his lips coming towards hers.

“The forced and unwanted kiss was deeply offensive to Ms Johnson,” the lawsuit says, adding that she suffered “emotional distress, psychological trauma, humiliation, embarrassment, loss of dignity, invasion of privacy and other damages”.

The Washington Post, which first reported details of the lawsuit, quoted Ms Johnson as saying: “I immediately felt violated because I wasn’t expecting it or wanting it. I can still see his lips coming straight for my face.”

In a statement to the newspaper, White House press secretary Sarah Sanders dismissed Ms Johnson’s allegation as “absurd on its face”.

Ms Johnson filed the lawsuit in Florida on Monday, seeking damages for emotional pain and suffering.

The Washington Post said the lawsuit “also alleges the campaign discriminated against Johnson, who is black, by paying her less than her white male counterparts”.

A spokesman for the Trump campaign denied the claim.

Mr Trump has been accused of sexual misconduct by numerous women, claims which he denies.

In October 2016, a month before election day, the Washington Post reported on a video tape recorded behind the scenes of the Access Hollywood NBC TV show, in which Mr Trump was heard to boast of how his fame allowed him to make aggressive approaches to women.

Unaware that a microphone was on, Mr Trump said of one woman: “I did try and f**k her, she was married.”

He also told show host Billy Bush that when he met beautiful women, he felt entitled to “grab them by the pussy”.

At the time, Mr Trump said: “Anyone who knows me knows these words don’t reflect who I am. I said it. I am wrong. I apologise.”

At the time of the alleged incident, Ms Johnson’s main job with the Trump campaign was to manage a fleet of recreational vehicles that served as travelling offices throughout Florida.

According to the lawsuit, Mr Trump visited one of these RVs in Tampa before a rally there, when the alleged unwanted kiss took place.

“He told her he knew she had been on the road for a long time and that she had been doing a great job. He also told Ms Johnson that he would not forget about her, and that he was going to take care of her,” Ms Johnson claims in the lawsuit.

Among those who allegedly witnessed the incident was Pam Bondi, at the time Florida’s attorney general and a Trump supporter.

The lawsuit contends that Ms Bondi “glanced at Ms Johnson and smiled” after the alleged unwanted kiss.

Ms Bondi did not immediately respond on Monday to an email seeking comment.

The Washington Post reported that in September 2018, three months after Ms Johnson hired the Washington DC attorney Hassan Zavareei to handle the Trump case, Ms Johnson “moved to seal a years-old court case in which two family members had briefly sought a temporary restraining order against her”.

The restraining order was brought against Ms Johnson in 2006.

According to the Washington Post, Ms Johnson’s half-sister alleged that Ms Johnson had been calling another sister’s school and falsely claiming that the teenager was using drugs.

Mr Zavareei said: “These false allegations came in the context of a family dispute that was resolved amicably years ago.

“Ms Johnson’s family stands firmly behind her pursuit of justice against Donald Trump for the sexual assaults he has committed against Ms Johnson and so many other women over the course of decades.” – Guardian