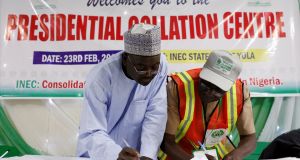 Electoral commission officials at the state office in Yola, Adamawa State, Nigeria, go over the results of the country’s presidential election on Monday. Photograph: Nyancho NwaNri/Reuters

President Muhammadu Buhari took an early lead on Monday in initial official results from Nigeria’s presidential election but the party of his main challenger quickly rejected the tallies as “incorrect and unacceptable”.

Saturday’s election, which US observers said had lost some credibility after being abruptly delayed by a week by officials citing organisational glitches, was expected to be Nigeria’s tightest since the end of military rule two decades ago.

At stake is the leadership of Africa’s top oil producer and biggest economy, rattled by a decade-long battle with Islamist militants in the northeast that has spilled into neighbouring countries and prompted the deployment of a regional task force.

Mr Buhari (76), is a former military ruler seeking a second term on an anti-corruption platform. His opponent, Atiku Abubakar (72) a businessman and ex-vice president who is widely referred to by his first name only, has pledged above all to expand the role of the private sector.

Initial results released by the national electoral commission on Monday put Mr Buhari in the lead. He won in four of Nigeria’s 36 states – two in the southwest, and one each in the east and central parts of the country, the commission said, while Atiku prevailed in the capital, Abuja.

In provisional results announced in state capitals but not yet confirmed by the electoral commission, Mr Buhari took the northeastern state of Yobe while Atiku won in Ondo state in the southwest.

Asked about the early results, Mr Buhari told reporters: “I don’t want to depend on rumours...We will rather wait for [the commission] to announce the [full] results”.

But the chairman of Atiku’s People’s Democratic Party (PDP), Uche Secondus, said the election tallies announced so far were “incorrect and unacceptable”.

“The results are being manipulated and cancelled for APC to retain power,” he told reporters, referring to Mr Buhari’s party.

The full outcome, not expected before later in the week, appears to hinge on which man voters trust most to revamp an economy still struggling from a 2016 recession.

A credible and relatively calm vote would open a new chapter in the chequered political history of Nigeria, where nearly six decades of independence have been tarnished by military coups, endemic corruption and secessionist movements.

Doubts rose when the election was postponed on February 16th, just hours before it was due to begin, with authorities citing problems in delivering ballot papers and results sheets.

The week-long delay in holding the election damaged public trust in the process and probably reduced Saturday’s voter turnout, US observers said. “It is highly probable that such a late postponement had negative effects on voter turnout,” John Tomaszewski of the joint US National Democratic Institute and International Republican Institute observer delegation, told reporters.

The delay also undermined public confidence in the electoral commission, he said.

The civil society group Yiaga Africa, which monitored the election, projected turnout at 36-40 percent. Situation Room, a monitoring mission comprising over 70 civic groups, said on Sunday that as many as 39 people had been killed in election-related violence, and more than 260 in all since the start of the campaign in October.

Voting, however, took place “in a generally peaceful environment”, said Hailemariam Desalegn, head of the African Union observer mission and a former premier of Ethiopia. “There were scattered incidents of violence but it was not seen as pervasive on Election Day,” said Derek Mitchell, president of the US observer mission.

Previous Nigerian elections have been marred by violence among supporters of different political parties that at times sparked sectarian conflict. Security forces are currently stretched by the Islamist insurgency as well as by communal violence and banditry in other areas.

Hours before polls opened, explosions rocked Maiduguri, the capital of Borno state, the epicentre of the insurgency. In neighbouring Yobe, residents of the town of Geidam fled a militant attack around the same time.

Scattered violence and problems with smart card readers that authenticate voters’ fingerprints meant voting in a small number of precincts had to put off to Sunday, Mr Mitchell said. “Serious operational shortcomings put an undue burden on voters,” Maria Arena, the EU’s chief observer and member of the European Parliament, told reporters. – Reuters