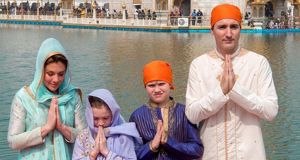 The enduring issue of radical Sikhs in Canada demanding a separate homeland for their community in India’s Punjab state continued to overshadow prime minister Justin Trudeau’s visit to India on Wednesday, as he travelled to the holiest site of Sikhism in northern India.

Mr Trudeau visited the Golden Temple in Amritsar, and later met Punjab chief minister Amarinder Singh and addressed the concerns of his hosts, the state leader said, assuring them Canada won’t support anyone trying to revive a separatist movement in India.

“I am very impressed with my meeting with the prime minister. I raised the issue of Khalistan [the Sikh nationalist movement] because that is our primary issue,” Mr Singh said, adding that he had received a categorical assurance from Mr Trudeau.

“His words are a big relief to all of us here in India and we look forward to his government’s support in tackling fringe separatist elements,” he said in a tweet.

The issue has partly soured Mr Trudeau’s week-long visit to India. Senior Indian diplomats said there was an element of “coldness” on the part of the government during the Canadian leader’s public appearances, as he went about a series of visits and engagements across the country with business and other community leaders.

They said the trigger for the prevailing frostiness was provided by Mr Trudeau himself last April when he attended a parade organised by radical Sikhs at their gurdwara or temple in Toronto, which featured posters and flags demanding the Sikh homeland of Khalistan or “Land of the Pure”.

The parade also included floats lionising Sikh separatists and included a series of fiery speeches by radicals, reportedly in Mr Trudeau’s presence. They accused India’s federal government of backing the Sikh pogrom in 1984 following the assassination of prime minister Indira Gandhi by her two Sikh bodyguards.

At that time some 2,500 Sikhs were killed over a three-day period by Hindu mobs, mostly in New Delhi, in what was perceived to be state-sponsored genocide, for which many senior leaders have since apologised.

“The visit to the [Toronto] parade was a no-no for a Canadian prime minister,” former Indian high commissioner to Canada Vishnu Prakash told The Hindu newspaper. Mr Trudeau, he added, had been left in no doubt about India’s concerns on this issue.

India and Canada have been engaged in a running diplomatic and political battle over these radical Sikhs since the 1980s, with Delhi accusing successive Canadian administrations, including Mr Trudeau’s, of tacitly backing them.

In recent years many such Sikhs had been elected MPs in Canada, and much to India’s chagrin continue to espouse their demand for a homeland in Punjab.

Four Sikhs were appointed senior ministers in Mr Trudeau’s cabinet. Two of the ministers are part of Mr Trudeau’s entourage to India, an inclusion which is a sore point with Delhi and has added to the chilliness between both sides.

This coolness manifested itself upon Mr Trudeau’s arrival in Delhi at the weekend when he was received by junior agriculture minister Gajendra Singh and only by district officials when he visited Taj Mahal in Agra a day later.

In recent times, many foreign heads of government, especially of larger countries like Canada, have been personally received at Delhi’s airport by prime minister Narendra Modi himself, and by the provincial chief minister of northern Uttar Pradesh state, where Agra is located.

Over the nearly four years Mr Modi has been in office he has earned a reputation for bear-hugging world leaders and personally escorting some of them to his western home state of Gujarat, which Mr Trudeau visited on Monday. Mr Modi did not accompany him.

Canada is home to about 4.68 million Sikhs, many of whom financially and politically backed the 15-year long Sikh insurgency in northern Punjab state to create Khalistan .

The Sikh separatist movement claimed more than 80,000 lives before it was crushed around 1993, but small groups of Sikhs in Canada continue to support Khalistan.