Billy Graham, preacher and adviser to US presidents, dies aged 99

In this archive video, thousands of people watched American evangelist Billy Graham at Wembley Stadium during his world tour in May 1954. 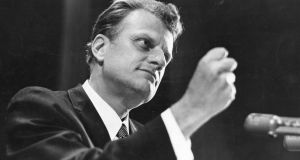 Rev Billy Graham speaks to an audience of police officers at the Waldorf Astoria Hotel in New York in May 1969. Photograph: William Sauro/The New York Times 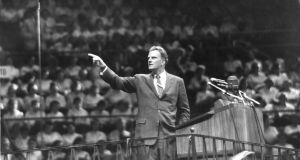 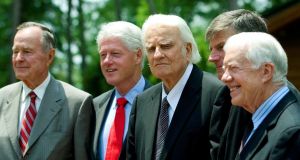 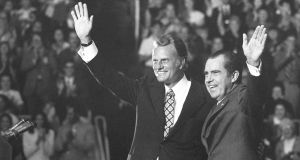 The Rev Billy Graham, a North Carolina farmer’s son who preached to millions in stadium events he called crusades, becoming a pastor to presidents and the nation’s best-known Christian evangelist for more than 60 years, died on Wednesday at his home. He was 99. His death was confirmed by Jeremy Blume, a spokesman for the Billy Graham Evangelistic Association.

Graham had dealt with a number of illnesses in his last years, including prostate cancer, hydrocephalus (a buildup of fluid in the brain) and symptoms of Parkinson’s disease.

Graham spread his influence across the country and around the world through a combination of religious conviction, commanding stage presence and shrewd use of radio, television and advanced communication technologies. A central achievement was his encouraging evangelical Protestants to regain the social influence they had once wielded, reversing a retreat from public life that had begun when their efforts to challenge evolution theory were defeated in the Scopes trial in 1925. But in his later years, Graham kept his distance from the evangelical political movement he had helped engender, refusing to endorse candidates and avoiding the volatile issues dear to religious conservatives. “If I get on these other subjects, it divides the audience on an issue that is not the issue I’m promoting,” he said in an interview at his home in North Carolina in 2005 while preparing for his last US crusade, in New York City. “I’m just promoting the Gospel.”

Graham took the role of evangelist to a new level, lifting it from the sawdust floors of canvas tents in small-town America to the podiums of packed stadiums in the world’s major cities. He wrote some 30 books and was among the first to use new communication technologies for religious purposes. During his “global crusade” from Puerto Rico in 1995, his sermons were translated simultaneously into 48 languages and transmitted to 185 countries by satellite.

Graham’s standing as a religious leader was unusual: unlike the pope or the Dalai Lama, he spoke for neither a particular church (though he was a Southern Baptist) nor a particular people. At times, he seemed to fill the role of national clergyman. He read from scripture at President Richard M Nixon’s funeral in California in 1994, offered prayers at a service in the national cathedral for victims of the 9/11 terrorist attacks in 2001 and, despite his failing health, travelled to New Orleans in 2006 to preach to survivors of Hurricane Katrina. His reach was global, and he was welcomed even by repressive leaders such as Kim Il Sung of North Korea, who invited him to preach in Pyongyang’s officially sanctioned churches.

In his younger days, Graham became a role model for aspiring evangelists, prompting countless young men to copy his cadences, his gestures and even the way he combed his wavy blond hair. He was not without critics. Early in his career, some mainline Protestant leaders and theologians accused him of preaching a simplistic message of personal salvation that ignored the complexities of societal problems such as racism and poverty. Later, critics said he had shown political naivety in maintaining a close public association with Nixon long after Nixon had been implicated in the cover-up of the Watergate break-in.

Graham’s image was tainted in 2002 with the release of audiotapes that Nixon had secretly recorded in the White House three decades earlier. The two men were heard agreeing that liberal Jews controlled the media and were responsible for pornography. “A lot of the Jews are great friends of mine,” Graham said at one point on the tapes. “They swarm around me and are friendly to me because they know that I’m friendly with Israel. But they don’t know how I really feel about what they are doing to this country.”

Graham issued a written apology and met with Jewish leaders. In the interview in 2005, he said of the conversation with Nixon: “I didn’t remember it, I still don’t remember it, but it was there. I guess I was sort of caught up in the conversation somehow.” In the last few decades, a new generation of evangelists, including Graham’s elder son, Franklin Graham, began developing their own followings. In November 1995, on his 77th birthday, Graham named Franklin to succeed him as head of his organisation, the Billy Graham Evangelistic Association. His daughter Anne Graham Lotz and his grandsons Will Graham and William Graham Tullian Tchividjian are also in ministry.

As a popular evangelist, Graham was by no means unique in US history. George Whitefield in the mid-18th century, Charles G Finney and Dwight L Moody in the 19th century, and Billy Sunday at the turn of the 20th were all capable of drawing vast crowds. But none of them combined the ambition, the talent for organisation and the reach of Graham, who had the advantages of jet travel and electronic media to convey his message. In 2007, the Billy Graham Evangelistic Association, with 750 employees, estimated that he had preached the Gospel to more than 215 million people in more than 185 countries and territories since beginning his crusades in Grand Rapids, Michigan, in October 1947. He reached hundreds of millions more on television, through video and in film. “This is not mass evangelism,” Graham liked to say, “but personal evangelism on a mass scale.”

The Grahams lived on a 200-acre mountain retreat in Montreat, North Carolina. His wife, Ruth Bell Graham, died in 2007. He is survived by his sons, the Rev William Franklin III and the Rev Nelson Graham, known as Ned; three daughters, Virginia Tchividjian (known as Gigi), Anne Graham Lotz and Ruth Graham McIntyre; and numerous grandchildren and great-grandchildren. Recognizing his influence, presidents made a point of seeking friendly relations with Graham; Lyndon B Johnson did so assiduously.

Graham was a frequent guest of Ronald Reagan, and in January 1991, George HW Bush invited him to spend the night at the White House the day before US-led forces began bombing Iraq. Clinton asked Graham to offer prayers at his inauguration in 1993. President George W Bush said it had been after a walk with Graham at the Bush family’s compound in Kennebunkport, Maine, that Bush, as a younger man, decided to become more serious about his faith and quit drinking. President Barack Obama visited Graham at his North Carolina home in 2010.

Of the presidents, Graham was most closely associated with Nixon. He gave the invocation at Nixon’s 1969 inauguration and came to be described as Nixon’s unofficial White House chaplain. Graham said he had been “innocently unaware” of the storm gathering over Watergate. But when the extent of the scandal became known, Graham tended to look the other way, his critics said. In 1982, Graham displeased the Reagan administration when, after a visit to the Soviet Union, he spoke in favour of universal nuclear disarmament. He also visited Russian churches, and his comment that he had seen no evidence of religious repression by the Soviet authorities created a furore among conservative church members in the United States. It was during this period, in his sixth decade as an evangelist, that Graham and his organisation experimented with new technologies. In 1986, in Paris, he used direct satellite transmissions to carry his sermons to about 30 other French cities. With his crusade in San Juan, Puerto Rico, in 1995, he expanded his satellite reach more than sixfold.

Graham also broke ground by going to places where religious activity was officially restricted, including China and North Korea. The first of his 30 books was Peace With God, published in 1953; his last was Nearing Home, in 2011. The Billy Graham Evangelistic Association, with more than 1,000 employees around the world, continues to organise crusades. It also produces Graham’s global radio programme and prime-time television specials, and trains thousands of evangelists and missionaries. A rapid-response team deploys chaplains to disaster areas.

Why it all came about remained a puzzle to Graham. In his autobiography, he wrote: “I have often said that the first thing I am going to do when I get to heaven is ask: ‘Why me, Lord? Why did You choose a farmboy from North Carolina to preach to so many people, to have such a wonderful team of associates, and to have a part in what You were doing in the latter half of the 20th century?’

“I have thought about that question a great deal,” he added, “but I know also that only God knows the answer.” – New York Times