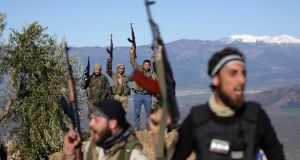 Their arrival raises the spectre of wider escalation on Syria’s northern battlefront, where the Syrian army, allied Iran-linked militias, Kurdish forces, rebels, Turkish troops, and Russian and American forces are all contending.

The Syrian Kurdish YPG militia said Turkish planes bombed a town in Afrin on Wednesday. Turkey began its assault last month to drive out the YPG, which it deems a security threat along its border akin to the Kurdish PKK insurgency on its own soil.

Paramilitary forces aligned with Syrian president Bashar al-Assad arrived in Afrin on Tuesday. Turkey and the Syrian insurgents it supports tried to force them back with artillery fire.

Turkish president Recep Tayyip Erdogan’s spokesman said on Wednesday the forces in a convoy of some 40-50 vehicles had retreated. “Any step by the [Syrian] regime or other elements in this direction will surely have serious consequences,” Ibrahim Kalin told a news conference.

A pro-Assad military commander told Reuters the forces in Afrin had returned fire against Turkey-backed rebels.

A new confrontation, pitting the Turkish army directly against pro-Assad forces, would further scramble the web of alliances and rivalries already at play in northern Syria.

Mr Erdogan described the pro-government fighters coming to the YPG’s aid as Shia Muslim militias acting independently and warned they would pay a heavy price.

“Any step there aimed at supporting the . . . YPG terrorist organisation will mean they . . . become legitimate targets for us,” his spokesman said on Wednesday. Mr Kalin added that Turkey was not in direct talks with the Syrian government, but its messages were being indirectly conveyed.

The forces that arrived – which included combatants allied to Mr Assad but not Syrian army troops – will deploy near the Turkish border, the YPG said.

Before they entered, Mr Erdogan said he had won Russian president Vladimir Putin’s backing to block a Syrian government deployment to Afrin. The pro-Assad commander said Russia had intervened to “delay the entry” of Syrian army troops, and so allied “popular forces” with heavy weaponry went instead.

Syrian Kurdish officials have said Moscow sought to stop a deal between Kurdish forces and the Damascus government for army soldiers to deploy to Afrin. Moscow, they said, wanted to secure its interests in Syria and keep leverage with Ankara to advance its wider ambitions of brokering a settlement of the conflict.

Turkey and Russia have backed opposing sides during the seven-year war, with Moscow the closest ally of Mr Assad and Ankara one of the main backers of rebels fighting to overthrow him.

But Ankara shifted its Syria policy, seeking to mend broken ties with Russia and turning its efforts towards fighting what it sees as a growing menace from Kurdish forces in Syria.

Turkey has in recent months lent support to diplomacy by Russia, whose firepower helped Mr Assad’s government seize back most major cities from rebels and militants since 2015.

Ankara said last month it had sought Moscow’s agreement before launching the Afrin assault. “The Russians are the ones who decided this game,” said Kurdish politician Fawza Youssef.

“The Russians have been playing it like this for a while . . . They pressure the Turks with the Kurdish card [and vice versa],” said Mr Youssef, a senior member of the Kurdish-led autonomous authority in north Syria. – Reuters