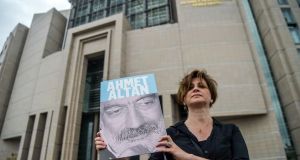 A Turkish court on Friday sentenced six journalists, including two prominent brothers, to life in jail for aiding plotters of a 2016 failed coup, state media said, a sharp turnaround after the country’s highest court ordered one of the men released.

Mehmet Altan, an economics professor and journalist, and his brother Ahmet, also a journalist, were charged with giving coded messages on a television talk show a day before the abortive military putsch. Nazli Ilicak, another well known journalist, was also among the sentenced.

The case has underscored both the deep concern about press freedom in Turkey as well as worries about the independence of the judiciary under president Tayyip Erdogan. Since the coup more than 50,000 people have been jailed and more than 150,000 sacked or suspended from their jobs.

Court officials were not immediately available to confirm the report from TRT Haber, a state-owned broadcaster. All six have denied the charges. At least three of the men have already been in prison for some 17 months.

The constitutional court, Turkey’s highest, had previously ruled for Mehmet Altan’s release, saying that his detention amounted to the violation of his rights. However, the penal court rejected that request and decided to keep him in jail as his trial continued.

Ahmet Altan was charged after he said on a programme: “Whatever the developments were that lead to military coups in Turkey, by making the same decisions, Erdogan is paving the same path”.

On the same programme, Mehmet Altan referred to “another structure” within the government that was closely watching the developments to “take its hand out of the bag”.

Prosecutors charged that the comments were coded messages to followers of the cleric Fethullah Gulen, whom Ankara blames for orchestrating the coup. –Reuters