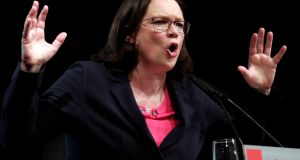 Andrea Nahles, parliamentary group leader of the Social Democratic Party (SPD): is hoping to be the party’s first woman leader, but has stood aside as acting chairperson until the formal vote. Photograph: Friedemann Vogel

Germany’s Social Democratic Party (SPD) is in freefall after weeks of coalition negotiations and personnel intrigues, with a new poll putting the party just one point ahead of the far-right Alternative für Deutschland (AfD).

The slump of Germany’s oldest political party, to a record low of just 16 per cent in the ARD public television poll, is another alarm signal for the SPD after it lost its most recent leader after just 11 months, and struggles to appoint a replacement.

Ambivalent rank-and-file party members are casting their postal votes on whether or not to join a third grand coalition with the centre-right Christian Democratic Union, with a result due on March 4th.

A separate poll this week suggested that two-thirds of SPD members back joining another grand coalition, after party leaders secured extensive concessions on spending and investment from the CDU in talks.

That is one ray of hope for the SPD leadership in their campaign to avoid a snap election. Their determination is only likely to grow after Friday’s poll – the second this week – showing a four-point slump in just five months.

On Friday, Andrea Nahles, hoping to be elected SPD leader in April, said she was concentrating on a country-wide tour to win party support for the coalition agreement negotiated earlier this month.

“What’s clear is that only in a government can we implement actual improvements for families, workers, in pensions and education,” she told the Augsburger Allgemeine daily.

She also dismissed calls, from the SPD’s left and youth wings, that it needed a break from power to renew its political identity in opposition.

Ms Nahles said such a process was “not a bit easier” in opposition than in government. “We will drive on the content and organisational renewal of the party with all our strength,” she said. “We need clear positions, courage and decisiveness.”

All three are in short supply in today’s SPD, say critics, as its support trickles away due to a mix of anger and apathy.

SPD voters were angered when Martin Schulz, after preaching the importance of political policy over personnel issues, used all-night coalition talks to secure the foreign minister post for himself. That sparked a bad-tempered public spat with incumbent Sigmar Gabriel, and now neither is likely to be Germany’s next chief diplomat.

Ms Nahles hasn’t been spared the fury of her party either. Mr Schulz proposed the 47 year old as his successor as acting leader, until her formal election in April’s party conference. A handful of regional party committees rebelled against a move they saw as another backroom appointment – this time in breach of party law.

Ms Nahles is still hoping to be the party’s first woman leader, but has stood aside as acting chairperson until the formal vote. The question now is how much party there will be left if she is elected.

When ex-leader Gerhard Schröder won the 1998 federal election, ousting Helmut Kohl after 16 years, the SPD polled a record 40.9 per cent. That dropped to 34 per cent in 2005, forcing Mr Schröder’s resignation and the SPD’s entry into a grand coalition under Dr Merkel. Since then the party has been in freefall as its centrist and leftist wings disagree over party policy in the globalisation era.

The ARD poll shows support for Dr Merkel’s CDU is steady at 33 per cent.