As a call for resistance, ‘Enlightenment Now’ is a howl into the wind 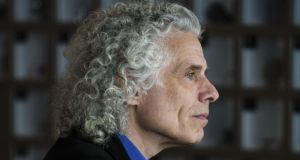 Steven Pinker: an Enlightenment man to the tips of his Newtonian hair, the Harvard professor bucks the zeitgeist with an argument that is both familiar and transgressive. Photograph: Chona Kasinger/New York Times

Populism’s strangest byproduct is a new role in international public life: leadership of the resistance.

Emmanuel Macron, Angela Merkel and Justin Trudeau have auditioned for this unpaid gig, bringing succour to liberals around the world, not just in France, Germany and Canada, where they lead governments. But no elected politician remains popular for long enough to hold down the job.

Which is why the burden increasingly falls on Steven Pinker. An Enlightenment man to the tips of his Newtonian hair, the Harvard professor bucks the zeitgeist with an argument that is both familiar and transgressive. Life has been improving in most measurable respects for the past few centuries, he says. The fashionable despair of anti-liberals on left and right is baseless. Worse, if it causes a rupture of what works – trade, free inquiry, the contact of peoples – the despair could be self-fulfilling.

Pessimism, like denim, is never out of fashion, and Steven Pinker’s graphs debunk it

Browbeaten liberals will punch the air as they read Enlightenment Now, Pinker’s new book. Pessimism, like denim, is never out of fashion, and his graphs debunk it. But although the book aspires to immediate political relevance (unlike his more detached works) it amounts to a fraught electoral strategy.

Liberals face the same choice everywhere: defend their creed and, with it, the global status quo circa 2016, or compete with populists to promise drastic change. The second option is craven, but the first exposes them to suspicions of cloistered arrogance.

The book’s critical reception has been telling. Without doubting its claims, reviewers bridle at the rationalist chauvinism. Argumentative atheists such as the late Christopher Hitchens provoked the same mix of agreement and distaste from avowed progressives, as if it were bad form to rub people’s noses in reality.

Pinker’s critics are of his approximate class and learning. If they find him too triumphalist by half, imagine the marginal voter’s reaction to a party that ran on a similar manifesto of redoubled liberalism, couched in the language of You’ve Never Had It So Good. Scholars deal in truth, but politicians have to traffic in tone and mood.

It gives you a sense of the liberal predicament that this is the lesser problem with Pinkerism. His book exposes liberals to a much deadlier charge: that of undervaluing what cannot be measured.

Not long ago optimism about the world was met with outright disbelief and accusations of statistical hocus-pocus. As the evidence becomes unanswerable few bother to deny the gains in health, income, education, life expectancy and physical safety any more.

But populism is not just doubt about the existence of material improvement. It is doubt about whether material improvement is enough for humans. If progress comes at the cost of social cohesion or the inner peace formerly supplied by religion, a certain cast of mind – as common on the left as on the right – would regard it as not worth the candle.

This is a potent line of attack in two ways. One, it is unfalsifiable. There is no data on existential ennui. There is no way of knowing if it really is higher than in some idealised yesteryear. Second, even if it were, liberals are not equipped to respond.

Liberalism is a framework of rules and institutions. It takes no view on what kind of society “should” result. In fact a good liberal worries when the state expounds on what constitutes the good life. The beauty of the technocratic centre ground is that very little blood is spilt in its name. The weakness is that it leaves some people ravenous for more fulfilling ideologies.

As an intellectual case Enlightenment Now is formidable. As a guide to political action it is a howl into the wind. If Pinker were only up against those who disbelieve the Enlightenment’s claimed achievements he would win the argument hands down. He has the data. But he is also up against those who follow in the tradition of DH Lawrence a century ago, and the Romantic poets 100 years before that. Theirs is less a denial of material progress than a lamentation that progress is all too real.

You need not share this anti-modern anguish – I do not – to see its political power. What is Brexit if not the sacrifice of some material advantage for the less quantifiable pleasure of a more familiar society? The galling thing for liberals is that this quest for something beyond economic comfort rather takes that hard-won comfort for granted. It issues its demand for nourishment of the soul from the very summit of Maslow’s hierarchy of needs. It banks the achievements of the Enlightenment that Pinker fights to defend.