Police arrest friends and confidants of Netanyahu, as well as top executives of Bezeq 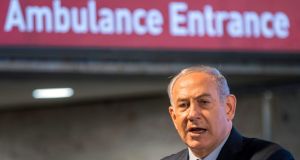 The mushrooming corruption scandal plaguing Israel’s prime minister Binyamin Netanyahu took a surprising turn on Tuesday, with an allegation that one of his closest advisers had sought to bribe a judge into dropping a criminal investigation involving the prime minister’s wife.

At the same time, Israeli police said they had arrested several of Netanyahu’s friends and confidants, as well as top executives of Bezeq, the country’s biggest telecommunications company, in a widening inquiry into whether Netanyahu had traded official favours for favourable news coverage.

The new allegations significantly raise the level of political and legal peril the prime minister faces, suggesting that he or some in his camp could be exposed to charges of obstructing justice.

On Tuesday night, Netanyahu’s situation appeared to become even graver, as Israeli news organisations reported that one of those arrested – a top government official who reported directly to Netanyahu on the Bezeq affair – was in talks with prosecutors to become a government witness.

Netanyahu was already embattled after police recommended a week ago that he be prosecuted for accepting what they said were bribes worth nearly $300,000 from wealthy businessmen seeking government favours.

With this latest round of allegations he will come under even greater strains, accused by his critics on the left of sabre rattling over Iran and pressured by the right to accept its agenda of expanding settlements and annexing the West Bank in return for its support.

Late Tuesday, Netanyahu released a video denying the newest allegations, calling them “hallucinatory”, “baseless” and part of a “campaign of persecution against me and my family that has been going on for years”.

Back at home, opponents from the Israeli left and centre are demanding that Netanyahu resign or declare himself “incapacitated”: Yair Lapid of the centrist Yesh Atid party, calling in vain for a no-confidence vote, said Monday that Netanyahu should appoint a temporary prime minister from within his own party.

“Israel deserves a full-time prime minister who is not engaged in anything else,” Lapid said.

Another of Netanyahu’s main challengers, Avi Gabbay of Labor, said that the prime minister had “become a liability for the citizens of Israel”. Gabbay lamented Netanyahu’s “sickly obsession for ‘what will people say’ and what will be written about him in the media,” adding: “Every day that he stays in office is damage to the country.”

Yet, Netanyahu’s right-wing coalition appears solidly behind him. On Tuesday morning, even as reports were first surfacing about the allegations of an attempt to bribe a judge, the prime minister’s coalition allies were loudly denouncing the police commissioner as biased and unprofessional, while accusing him of leaking like a sieve about the various Netanyahu-related inquiries.

At the centre of the two new allegations is a close adviser to the prime minister, Nir Hefetz, a veteran Israeli journalist and political operative who in recent years has bounced back and forth between editing jobs and tending to the public image of the prime minister and his family.

In 2015 he was a top strategist for the Likud party’s successful election campaign. Late that year, according to police and Israeli news reports, Hefetz, working as the Netanyahu family’s media adviser, passed a message through an intermediary to Israel’s commissioner for prosecutorial oversight, Judge Hila Gerstel: Would she drop a corruption case against Netanyahu’s wife, Sara, in exchange for being named attorney general?

The case was not dropped, and Gerstel did not become attorney general. Avichai Mandelblit, who did get the job, announced in September that he intended to indict Sara Netanyahu on fraud charges, accusing her of misusing some $100,000 through her management of the prime minister’s official residence in Jerusalem.

Hefetz resigned as the Netanyahu family’s spokesman in October. The family’s current spokesman, Ofer Golan, denied any attempt by Hefetz to sway the judge’s actions. “Nir Hefetz never offered this hallucinatory proposal to the prime minister and his wife,” Golan said in a statement. “He was never asked to make such a proposal, and we do not believe that Hefetz even raised such a thing.”

He added sarcastically: “The Netanyahu couple will soon be accused of murdering Arlosoroff,” referring to the Zionist leader Chaim Arlosoroff, who was assassinated in Tel Aviv in 1933.

The arrests in connection with Bezeq – a $2.9 billion telecom giant with telephone, television and news divisions – involve official actions taken by Netanyahu’s government that were worth hundreds of millions of dollars to a near monopoly enterprise that sends monthly bills to most ordinary Israeli voters.

Bezeq’s subsidiaries include a cable television company and Walla, a news website. Netanyahu’s aides are suspected of trading favourable treatment by the communications ministry, which regulates the company, for favourable coverage by the news site.

(Police last week accused Netanyahu of a similar swap: bargaining for favourable coverage in Yediot Ahronot, a big Israeli daily newspaper, by offering its publisher help in fending off a competitor.)

Netanyahu personally directed the ministry from 2014 to 2017. During that period, Bezeq’s controlling shareholder, Shaul Elovitch, was trying to merge the Yes satellite-television company, of which he owned half, into the larger conglomerate, but at terms that were far more favourable to him than to Bezeq’s shareholders.

Elovitch sought a series of regulatory approvals that were opposed by low-level officials in the communications ministry but approved nonetheless.

On Sunday, police arrested Hefetz; Shlomo Filber, who was director general of the communications ministry and reported directly to Netanyahu; Elovitch; his wife, Iris; his son, Or, who was a director of both Bezeq and Yes, the cable TV company; Stella Handler, Bezeq’s chief executive; and Amikam Shorer, the company’s business development manager.

The Bezeq inquiry involves suspicions of obstruction of justice, as well as fraud and breach of trust, police said Tuesday in lifting a gag order on the names of those arrested.

Reuven Kuvent, a former investigations chief of the Israeli securities authority, said the challenge for law enforcement officers would be to establish an explicit link between the favourable news media coverage and the government’s aid to Bezeq and Elovitch.

“Things like that are not a written contract,” Kuvent said. “So what they’re trying now is to get a state’s witness: Elovitch, Hefetz or Filber.”

Indeed, Filber was close to becoming a state witness, Israeli news organisations reported Tuesday night. “They need a connection between the Bezeq story and Walla news,” said Shmuel Sandler, a political science professor at Bar-Ilan University. “Maybe he will be it. If so, then that could change everything.”

The allegation about Gerstel is not the first time Netanyahu or one of his aides has been accused of using the office of attorney general as an inducement. In 1996, during his first stint as prime minister, Netanyahu was accused of striking a complicated three-way deal to name Roni Bar-On, an unexpected candidate, as attorney general to obtain the support of Arye Deri, a minister who was on trial for bribery, for a disputed plan to overhaul security arrangements in Hebron.

Bar-On quickly resigned amid criticism of his appointment. An investigation led to a police recommendation that Netanyahu be charged with fraud and breach of trust. But Bar-On’s replacement as attorney general, Elyakim Rubinstein, dropped the case, citing a lack of evidence.