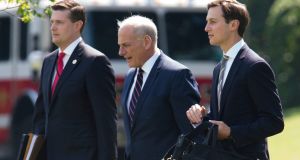 Jared Kushner, President Donald Trump’s son-in-law and senior adviser, is resisting giving up his access to highly classified information, prompting an internal struggle with John Kelly, the White House chief of staff, over who should be allowed to see some of the nation’s most sensitive secrets, according to White House officials and others briefed on the matter.

Kushner is one of dozens of White House officials operating under interim security clearances because of issues raised by the FBI during their background checks, according to the officials, who spoke on the condition of anonymity to discuss the clearances.

The practice has drawn added scrutiny because of Rob Porter, the former staff secretary who resigned under pressure this month after domestic abuse allegations against him became public.

Porter’s post entailed handling and reviewing the flow of documents to and from the president, which routinely includes highly classified material. He had been allowed to continue in the job for more than a year with a stopgap clearance even though the FBI had informed the White House of the damaging accusations against him.

Kushner’s clearance has afforded him access to closely guarded information, including the presidential daily brief, the intelligence summary Trump receives every day, but it has not been made permanent, and his background investigation is still pending after 13 months serving in Trump’s inner circle.

Now Kelly, his job at risk and his reputation as an enforcer of order and discipline tarnished by the scandal, is working to revamp the security clearance process, starting with an effort to strip officials who have interim clearances of their high-level access. In a memo issued on Friday, Kelly said he would revoke top clearances for anyone whose background check had been pending since June 1st or earlier, and review such clearances every month thereafter.

Kushner, frustrated about the security clearance issue and concerned that Kelly has targeted him personally with the directive, has told colleagues at the White House that he is reluctant to give up his high-level access, the officials said. In the talks, the officials say, Kushner has insisted that he maintain his current level of access, including the ability to review the daily intelligence briefing when he sees fit.

But Kelly, who has been privately dismissive of Kushner since taking the post of chief of staff but has rarely taken him on directly, has made no guarantees, saying only that the president’s son-in-law will still have all the access he needs to do his job under the new system.

“As I told Jared days ago, I have full confidence in his ability to continue performing his duties in his foreign policy portfolio including overseeing our Israeli-Palestinian peace effort and serving as an integral part of our relationship with Mexico, ” Kelly said in a statement the White House released on Tuesday in which he refused to address Kushner’s security clearance or elaborate on his memo.

“Everyone in the White House is grateful for these valuable contributions to furthering the president’s agenda,” Kelly said of Kushner. “There is no truth to any suggestion otherwise.”

It is unclear whether Kushner needs to review highly classified information. His current portfolio – which includes acting as an intermediary with Mexico, trying to forge Israeli-Palestinian peace negotiations, participating in an economic dialogue with China and working on revising the North American Free Trade Agreement – seems unlikely to involve major intelligence or national security secrets.

The fact that the White House chief of staff would take the step of publicly denying that a policy change would harm the president’s son-in-law pointed up the tension in the West Wing after the Porter episode, particularly between Kelly on one side, and Kushner and his wife, Ivanka Trump, who had been close allies of Porter, on the other.

Kushner and Ivanka Trump have been critical of Kelly in conversations with the president, who spent the weekend at his Mar-a-Lago resort in Palm Beach, Florida, surveying people about whether he should fire his chief of staff. However, since Porter’s departure, one official said, Kushner and Ivanka Trump have told people around the White House that they have been vocal in their attempts to defend Kelly but are being treated unfairly in return.

One person familiar with Kushner’s thinking, who insisted on anonymity to describe it, denied that he felt personally targeted by Kelly or was agitating to have him removed. Another White House official denied that Kushner had ever raised the issue of the intelligence summary in his discussions with Kelly over his clearance.

But the memo, deliberately or otherwise, has put an unflattering light on Kushner, raising questions about whether he can be effective in his post and how much authority he has. That debate threatens to complicate what Kelly has acknowledged is a long-overdue effort inside the White House to get a handle on the clearance process, a national security imperative over which top officials appear to have placed little priority after Trump took office.

“We should – and in the future, must – do better,” Kelly said in his memo last week.

The questions surrounding Kushner’s clearance are particularly acute because of the possibility that his extensive contacts with foreign actors – including travel, meetings with leaders overseas and multiple business ventures – might be relevant to the investigation by the special counsel, Robert Mueller, into Russian meddling in the 2016 presidential election.

Kushner initially failed to disclose scores of those contacts on the standard form required for all prospective government officials, and has since amended his submission, substantially delaying his background check. That meant that his background information was not submitted in its entirety until June, after the June 1st cut-off that Kelly set in his memo. – New York Times