US urges Ukraine to redouble reform efforts on revolution anniversary 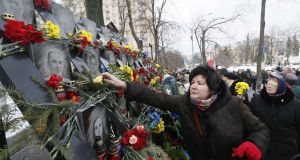 People attend a commemoration ceremony at the monument to the so-called Nebesna Sotnya (Heavenly Hundred), the people killed during the Ukrainian pro- EU mass protests in 2014, in Kiev on Tuesday. Photograph: Valentyn Ogirenko/Reuters

The United States has urged Ukraine’s leaders to revitalise their halting reform drive, as the country marked four years since the deadliest day of its Maidan revolution.

President Petro Poroshenko and other top Ukrainian officials took part in commemoration events on Tuesday, but face deep public anger over the failure to catch and jail those responsible for killing more than 100 people during three months of protests in winter 2013-14.

That anger is compounded by a widespread feeling that Mr Poroshenko and his allies have failed to fulfil the demands of the revolution, when Ukrainians rallied across most of the country to call for sweeping democratic change and an end to corruption.

After placing a candle at a memorial near Kiev’s Maidan square to the so-called Heavenly Hundred – protesters killed by security forces loyal to then president Viktor Yanukovich – Mr Poroshenko defended his record.

“Over these four years a lot has been done. Just in the last year, Ukrainians have acquired the right to visa-free journeys to the EU, the Ukraine-EU association agreement has been ratified and come into force,” he said.

The revolution erupted in November 2013, when riot police attacked peaceful protesters on Maidan who wanted Mr Yanukovich to reverse his shock decision to scrap the historic EU deal and instead strengthen ties with Moscow.

Mr Yanukovich and his entourage fled Kiev late on February 21st and soon found refuge in Russia, which the following month annexed Crimea and began to foment separatist unrest in eastern Ukraine. More than 10,300 people have been killed in a continuing war there between government forces and Russian-led separatists.

“Today, before the memory of the Heavenly Hundred, we promise that Ukraine will be united and a united Ukraine will liberate every scrap of Ukrainian land in the east and in Crimea,” Mr Poroshenko said.

The confectionery billionaire has dismal popularity ratings, however, due to his failure to oversee a swingeing crackdown on corruption and end a system of rule based on backroom deals between wealthy “oligarchs” and their political operatives.

Many pre-revolutionary prosecutors and judges retained their posts, and only one person is now serving a sentence for crimes against the Maidan protesters, while many suspects have fled the country and cases are stuck in legal limbo.

“Four years ago, Ukrainians from all walks of life and all regions of the country came together on the Maidan . . . to demand their government recognise the choice of the citizens of Ukraine to join Europe, ” the US state department said.

“The United States calls on Ukraine’s leaders to redouble their efforts to implement the deep, comprehensive and timely reforms that are necessary to build the stable, democratic, prosperous, and free country Ukrainians deserve.”