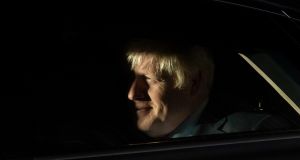 Boris Johnson’s failed bid to trigger a general election next month dominates coverage this Thursday morning , with papers either focusing on the humiliation of his defeat, many of which say the prime minister is a “cornered” man, or on Jeremy Corbyn’s refusal to back Johnson’s calls for a vote.

The Sun’s picture editors have been working overtime, superimposing Corbyn’s head onto a chicken’s body, with the headline: “Is THIS the most dangerous chicken in Britain?” while asserting “Corbyn clucks up Brexit” and “PM lays into cowardly Jez”.

The Scottish Sun, however, tailors its message for its SNP audience with its headline “Floppy Johnson can’t get an election”.

The Guardian says the “Cornered Johnson suffers triple Commons defeat”, adding: “The prime minister was thwarted three times in the House of Commons: an attempt by opposition parties and Tory rebels to block a no-deal Brexit easily cleared its second and third readings, and Johnson later failed in his attempt to force a snap general election.” The paper features a tally of votes prominently on its front page, showing how many MPs were for and against the bill to block a no-deal Brexit and the motion calling for a general election.

The FT has a similar report, though it has totted up the embarrassments for the PM differently: “Johnson backed into corner as Commons delivers double blow” is its main headline, over two other points: “Rebels join opposition to pass anti-no-deal bill”; and “Prime minister’s election call rebuffed”, which the paper calls “a humbling double defeat”.

The i also has the “PM cornered after day of defeats in the Commons”. The paper reports comments from Johnson attacking Corbyn for being “‘chicken and frit’ for not facing voters”.

The Times says “Johnson blocked as MPs refuse early election call”. The paper says the PM suffered “another bruising day at Westminster” and “faces an increasingly desperate battle to force a general election”.

“He just can’t win,” says the Metro, featuring a photograph of a very cross Johnson.

The Mirror – never a fan of Johnson – labels him “Britain’s worst PM (since the last one)” – making it clear who they’re referring to with an inset photo of Theresa May. The paper reports Johnson became “the only PM ever to lose his first three Commons votes as MPs vetoed his risky no-deal strategy”.

Then we reach the other papers that see today’s events as the fault of Jeremy Corbyn. The Telegraph lambasts the Labour leader, saying “Hypocrite Corbyn rejects election to break deadlock”, including Johnson’s comments that Corbyn was a “chicken”.

The Mail goes further, with a headline that says “Corbyn chickens out of an election”. “The Labour leader, who has repeatedly demanded a poll, said he would not support one until a law delaying Brexit yet again had passed through Parliament”.

The Express calls Corbyn’s refusal to back the calls for an election “an extraordinary act of cowardice” and said Johnson “wants country to pressure Parliament into backing his demands: “Boris urges ‘people power’ to force election”.