Gina Miller says she will not give up ‘fight for democracy’ 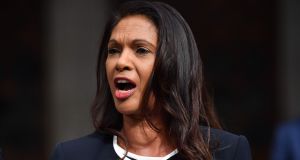 A legal challenge brought over British prime minister Boris Johnson’s decision to suspend parliament for five weeks has been rejected by leading judges.

They announced their decision on Friday at the High Court in London.

Rejecting Ms Miller’s case, Lord Justice Burnett said: “We have concluded that, whilst we should grant permission to apply for judicial review, the claim must be dismissed.”

Their ruling comes in the same week the British prime minister fought off a similar legal attack in Scotland. Meanwhile, a lawyer for a victims campaigner has said a no-deal Brexit would create chaos for Northern Ireland. Raymond McCord has launched a legal challenge, claiming Mr Johnson’s threat to leave the EU on October 31st, with or without an agreement, is unlawful.

Ms Miller’s QC had argued that Mr Johnson’s advice to Britain’s queen to suspend parliament for five weeks was an “unlawful abuse of power”.

The judges were urged to make a declaration that the decision taken on August 28th to advise the queen to prorogue parliament was unlawful.

The urgent judicial review application brought by Ms Miller — who successfully challenged the British government at the High Court in 2016 over the triggering of the Article 50 process to start the Brexit countdown — was supported by a number of other parties, including former prime minister John Major.

The action was contested by the prime minister, whose lawyers argued that the advice given to the queen was not unlawful and that Ms Miller’s claim was in any event “academic”.

During the hearing, Lord Pannick QC, representing Ms Miller, told the judges: “The prime minister’s decision to prorogue parliament is contrary to constitutional principle and constitutes an abuse of power.”

He argued: “There is no justification for closing parliament in this way and, accordingly, it represents an unjustified undermining of parliamentary sovereignty which is the bedrock of our constitution.”

Lord Pannick said the prime minister’s decision to advise the queen to suspend parliament was “extraordinary” — both because of the “exceptional length” of the suspension and because parliament will be “silenced” during the critical period leading up to the October 31st deadline.

In submitting that the judges should reject Ms Miller’s arguments, Sir James Eadie, on behalf of Mr Johnson, said: “The exercise of this prerogative power is intrinsically one of high policy and politics, not law.”

Arguing that the claim was “academic”, he pointed out that each House of Parliament will sit before the UK leaves the EU on October 31st “and may consider any matter it chooses”.

He told the court: “The prorogation does not prevent parliament from legislating on any matter it wishes. Parliament is capable of legislating at pace if it chooses to do so.”

The three judges are expected to give their reasons for dismissing the case in writing next week.

Rejecting the case, Lord Burnett said: “We have concluded that, whilst we should grant permission to apply for judicial review, the claim must be dismissed.”

The judges granted permission for the case to go the Supreme Court for an appeal, which will be heard on September 17th.

Speaking outside the Royal Courts of Justice after the ruling, Ms Miller said she was “very disappointed with the judgment”.

“To give up now would be a dereliction of our responsibility. We need to protect our institutions,” she said.

“It is not right that they should be shut down or bullied, especially at this most momentous time in history.

“My legal team and I will not give up our fight for democracy.”

She added: “We feel it is absolutely vital that Parliament should be sitting. We are therefore pleased that the judges have given us permission to appeal to the Supreme Court, which we will be doing, and they feel that our case has the merit to be handed up.

In Belfast, Mr McCord’s barrister, Ronan Lavery QC, praised the EU for its role in underpinning the peace process.

He said: “To leave without a withdrawal agreement would create chaos and economic misery and a real threat to the peace process in Northern Ireland — it would be madness.”

Mr McCord’s legal team began a judicial review at the High Court in Belfast on Friday.

His son, Raymond McCord Jnr, was murdered by loyalists from the Ulster Volunteer Force in North Belfast in 1997. He has repeatedly voiced concerns about the impact of Brexit on the peace process.

Mr Lavery said Northern Ireland was trying to move forward on a cohesive and non-tribal basis and was a model for what could be achieved when people put aside their differences. He added: “The EU is a peace project.”

He said the EU withdrawal process should serve the interests of the people of Northern Ireland.

He claimed there was no specific provision for leaving without a deal.

The barrister said the next step after the rejection of the withdrawal agreement by parliament was for a statement to be made by the government about how it proposed to proceed and making the policy clear.

Instead, he said, the policy was having to be divined from statements to the media as he scrutinised the legislation surrounding Brexit.

“Our very simple proposition is that, when you take this piece of legislation, nothing sanctioned or authorised the executive (government) to take the drastic step of leaving the EU without a deal.

“That needs to be expressly sanctioned by Parliament and it has not been.

“Any withdrawal is premised upon a deal.”

He said there was a unique challenge to the island of Ireland. - PA