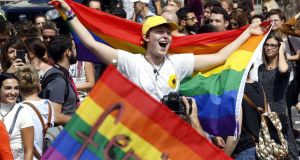 The European Union has praised Bosnia for holding its first gay pride parade, which passed off peacefully on Sunday despite protests from opponents and after previous LGBT events in the socially conservative country were attacked.

Sarajevo was the last capital city in the Balkans to host a gay pride march, reflecting the strength of right-wing political parties and religious groups among Bosnia’s Muslim Bosniaks, Orthodox Serbs and Catholic Croats.

About 1,000 people walked with flags, banners, drums and whistles through central Sarajevo, and sang anti-fascist songs as hundreds of police kept watch in a major security operation that included the deployment of anti-sniper officers on city rooftops.

“I welcome the holding of the first pride parade in Sarajevo today and wish the organisers and participants a peaceful event!” EU enlargement commissioner Johannes Hahn wrote on Twitter.

“This is an important step in the protection of the fundamental rights of all citizens in Bosnia . . . including of LGBTI persons, who have the right to live their lives free from discrimination, abuse and threats, and enjoy full social inclusion.”

Earlier, the EU delegation to Bosnia urged officials and party leaders “to refrain from statements undermining fundamental rights and to help ensure that the march takes place in dignity and peace,” and said “the rights to freedom of assembly and of expression . . . are of crucial importance for the progress of any aspiring EU member state”.

US ambassador to Bosnia Eric Nelson, who is gay, tweeted a photo of himself at the parade with a message saying he was “incredibly proud” to have taken part.

Before the parade, he issued a video message saying that the US embassy supported an event that he called a chance for Bosnia “to accept its diversity and show tolerance and respect for every individual”.

Small festivals in Sarajevo in support of LGBT rights were attacked in 2008 and 2014, and there were calls for Sunday’s gay pride to be cancelled on security and moral grounds.

Opponents held two marches over the weekend, the largest of which attracted several hundred people, at which they called for stronger “traditional family values” and criticised foreign support for the parade.

One participant, Mujo Aganovic, denounced Mr Nelson, the US envoy: “I want to send him the message that this is my country while he is just a guest here.”

“All those who want to promote in public what they describe as their sexual orientation, especially when it is opposed by three million people, we view them as provocateurs,” the Associated Press quoted him as telling the protest march.

Dunja Mijatovic, a Bosnian who is the Council of Europe’s commissioner for human rights, attended the parade and tweeted: “Happy to see that the first pride march in Sarajevo went well . . . I fully support you in this important event.”