India gearing up for colossal-scale election by end of May 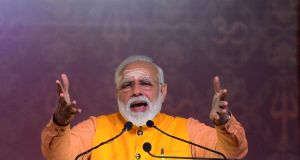 In what’s being described as the world’s largest ever electoral exercise, some 900 million voters will be eligible to choose India’s federal government for the next five years in elections to be held before the end of May.

The poll dates are yet to be announced by India’s election commission, but precedent suggests that electronic voting across some one million polling stations, from the northern Himalayan region to the country’s tropical south, will be staggered over multiple phases.

The extended voting schedule, likely to last some five weeks, is to enable the deployment of large numbers of paramilitaries to ensure violence- and coercion-free polling, neither of which is unknown in Indian elections.

The commission stipulates that a new Indian government has to be in place by the last week in May, indicating a voting timetable beginning around mid-April.

Voter numbers in India have increased by about 100 million since the 2014 elections in which prime minister Narendra Modi’s Hindu nationalist Bharatiya Janata Party (BJP) assumed power. It convincingly defeated the Congress Party-led coalition that had been in power in two successive administrations since 2004.

In the country’s first-past-the-post system, the BJP won 282 of 543 seats in the Lok Sabha,the lower house of parliament, securing India’s first single-party parliamentary majority in 30 years, on promises of economic development and jobs. Its overall tally along with its National Democratic Alliance partners was a a record-winning total of 336 MPs.

The Congress Party, led by Sonia Gandhi and her son Rahul, members of India’s age-old Nehru-Gandhi political dynasty, slumped to its lowest-ever tally of just 44 MPs. The party’s miserable showing was blamed on allegations of endemic corruption, misgovernance and nepotism during its decade in office. It was also seen as a revolt against the perpetuation of dynastic rule.

Rahul Gandhi’s great-grandfather, Jawaharlal Nehru, was India’s first prime minister for 17 years after independence in 1947, and was succeeded, after a brief hiatus, by Rahul’s grandmother Indira Gandhi, who was premier for 15 years. Thereafter her son Rajiv – Rahul’s father – became India’s prime minister for five years and, some time later, his Italian-born widow Sonia became Congress Party chief, a post she held for 19 years, before handing over to son Rahul in late 2017.

Modi launched his election campaign in January in what is swiftly building up to be a vicious and bruising contest. The BJP’s star campaigner, more in the presidential than prime-ministerial mode, skilfully exploits social media and offers to guarantee political stability, robust economic development and an uncompromising national security policy against troublesome neighbours such as nuclear rival Pakistan.

At a recent rally, he maintained that the fractured coalition of the Congress and other opposition regional parties was one of “rich, corrupt and scam-ridden leaders” who would bring “negativity, instability and inequality” if elected.

“They have formed alliances with each other. We’ve formed an alliance with 1.25 billion Indians,” Modi declared with characteristic flamboyance. They have “dhanshakti or money power, we have janshakti or People’s Power”, he added.

The disparate opposition alliance, forged despite bitter past differences between its partners, has been formed with the sole aim of preventing Modi’s return to power.

“We will not let the BJP be re-elected and destroy the idea of an inclusive India and all its institutions,” Gandhi said at a recent opposition rally in Chennai in southern India.

Opposition leaders claim that Modi’s autocratic style of governance has undermined democratic institutions including parliament, the judiciary and media, and autonomous organisations such as the Central Bank, the Central Bureau of Investigation and the electoral commission.

They hold the BJP-government responsible for fostering an economic crisis in the agrarian sector, which directly or indirectly sustains some 70 per cent of India’s population of 1.25 billion.

Official figures say that 5,650 farmers across India took their own lives in 2017, the last year for which such figures are available. Opposition leaders, however, claim that the actual number of such suicides was far higher, as local officials sometimes decline to register them.

“The upcoming elections are the only hope for the future of Indian democracy, and all political parties must co-operate to defeat the BJP,” former BJP federal minister Arun Shourie said recently in a televised interview. In an outspoken attack on the party, the former World Bank economist accused the government of “terrorising and choking the media to circulate ‘government falsehoods’”.

Rahul Gandhi also frequently refers to Modi in his public speeches as the “watchman-turned thief”, whilst Modi calls Gandhi “Namdar”, or dynast, and “Sahibzada”, or prince. Other BJP members openly refer to Gandhi as “Pappu”, or brat.

“The 2019 elections promise to be one of India’s most vicious and divisive,” said Seema Mustafa of the Centre for Policy Analysis in New Delhi. Their outcome would be critical to sustaining India’s democratic and secular credentials, she said.