Corbyn says Labour will back call for second Brexit referendum 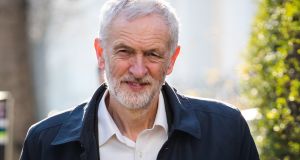 Campaigners for a second referendum on Brexit received a major boost on Monday night when Jeremy Corbyn said Labour will back another public vote on leaving the European Union.

Mr Corbyn told Labour MPs that the party would also back an amendment this week that would compel Theresa May to delay Brexit rather than leave the EU without a deal on March 29th.

“One way or another, we will do everything in our power to prevent no deal and oppose a damaging Tory Brexit based on Theresa May’s overwhelmingly rejected deal. That’s why, in line with our conference policy, we are committed to also putting forward or supporting an amendment in favour of a public vote to prevent a damaging Tory Brexit being forced on the country,” he said.

Mrs May will make a statement on Brexit to MPs on Tuesday ahead of votes on a series of amendments on Wednesday, including one tabled by Labour MPs Peter Kyle and Phil Wilson that would support the prime minister’s deal on condition that it is put to a referendum.

Labour will table an amendment outlining its own Brexit plan, including a permanent customs union but it is almost certain to be defeated.

This week Labour will put its alternative plan for a vote in the House of Commons.

If Parliament rejects our plan, then Labour will deliver on the promise we made at our annual conference and support a public vote. https://t.co/EjCifYCDJP

“If parliament rejects our plan, then Labour will deliver on the promise we made at our annual conference and support a public vote,” shadow Brexit secretary Keir Starmer said.

David Lammy, a Labour MP who campaigns for a second referendum, welcomed the shift in his party’s policy.

“Even if MPs can agree some sort of deal, it would be wrong to force it on the British people when we now know so many of the promises made in 2016 have been broken and any deal will be worse than the one we’ve already got inside the EU. These are dangerous times for the Labour Party and our country. Jeremy Corbyn is today taking the first step to reunite our party by showing he is listening to our voters and members on this, the biggest issue of our time,” he said.

In her statement to MPs on Tuesday, the prime minister is expected to seek to persuade Conservatives not to back an amendment on Wednesday tabled by Labour’s Yvette Cooper and Conservative Oliver Letwin. The amendment would enable MPs to pass legislation that would oblige May to seek an extension to the article 50 negotiating deadline.

“A delay in this process doesn’t deliver a decision in parliament, it doesn’t deliver a deal. All it does is precisely what the word ‘delay’ says. Any extension of article 50 isn’t addressing the issues,” the prime minister said in Sharm el-Sheikh on Monday.

“We have it within our grasp. I’ve had a real sense from the meetings I’ve had here and the conversations I’ve had in recent days that we can achieve that deal.”