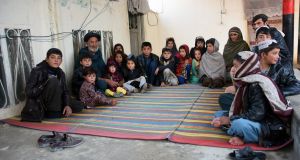 The highest-level negotiations yet between US diplomats and the Taliban began in Qatar’s capital on Monday, with the presence of the Afghan insurgents’ deputy leader raising hope of progress toward ending the long conflict that is taking lives in record numbers.

The talks in Doha, the fourth time Taliban officials have met with US negotiators in recent months, were expected to focus on the details of two issues that both sides said they had reached an agreement on in principle last month.

Under that framework, the Taliban would agree to keep Afghan territory from being a haven for terrorists, opening the door to a deal that could include a US troop withdrawal. After the last round of talks, US officials said that any withdrawal deal must include the Taliban’s agreeing to a ceasefire and to joining talks with the Afghan government.

The Taliban negotiators, the US officials said, did not have the authority to discuss a ceasefire or negotiations with the Afghans, and asked for time to return to their leadership.

Now, the presence at the talks of Mullah Abdul Ghani Baradar, the movement’s deputy chief and head of their political commission guiding the negotiators, could bring the Taliban team the decision-making authority they were lacking before.

The Taliban spokesman, Zabihullah Mujahid, confirmed that Mr Baradar was attending the talks with US diplomats in Doha. “The agenda of the meeting will be the old issues of ending the occupation and preventing harm to anyone from Afghanistan, ” Mr Mujahid said.

Before the talks began, Zalmay Khalilzad, the US special envoy leading the negotiations, said on Twitter on Monday afternoon that he had arrived in Doha “to meet with a more authoritative Taliban delegation”. “This could be a significant moment,” he said. “Appreciate Qatar for hosting and Pakistan in facilitating travel. Now the work begins in earnest.”

After the last round of talks, Taliban negotiators were saying that the Americans would begin a partial troop withdrawal as early as February, and that the details of a full withdrawal would be fleshed out by technical teams from both sides.

US officials rejected the suggestion that a troop withdrawal was already going into effect. Afghan officials, as well as analysts, have cautioned against the United States agreeing to such a move right away. They say it would remove the Americans’ most powerful leverage over the Taliban before the insurgents have made any concessions toward a future deal that would be acceptable to the Afghan government and would preserve progress toward rights for women and minorities.

During their time in power, the Taliban barred women from public life and ruled according to their own harsh interpretation of Islamic law, including banning music and television.

While the Taliban have said recently that they would respect women’s rights according to Islam, including their right to education, work and owning and inheriting property, many people remain sceptical that the insurgents could stomach the progress made in Afghanistan over the past 17 years. In large parts of the country, women have become an integral part of public and political life, and the growth of an independent media has been hailed as one of the biggest achievements.

“Sceptics have rushed to judgment based on just the first part of a much larger effort, as though we have a completed agreement,” Mr Khalilzad, the chief US negotiator, said after the marathon round of talks in Doha last month. “But you can’t eat an elephant in one bite. And a 40-year-old war won’t be resolved in one meeting, even if that meeting runs for close to a week.”

The trip to Doha by Mr Baradar and several other Pakistan-based Taliban leaders – part of an expanded negotiating team the insurgents announced recently – has seemingly resolved two urgent questions hanging over the talks in recent weeks: whether the Taliban, on UN sanctions lists, can travel for talks; and whether Pakistan had truly freed Mr Baradar from detention in order to allow him to engage in political discussions.

A founding leader of the Taliban who was instrumental in its regrouping as a stubborn insurgency after the US invasion in 2001 toppled their government, Mr Baradar ran afoul of Pakistani officials, who are supporting the Taliban as a proxy and giving some of their leaders sanctuary, when he began engaging with the Afghan government to discuss peace options. He was detained in a joint Pakistani-American raid and thrown in jail for years until Mr Khalilzad requested his release in the hope that he could be engaged in negotiations.

Afghan government officials, frustrated by what they see as the Taliban’s jet-setting for meetings abroad as violence at home intensifies, have recently complained to the UN Security Council that allowing their travel goes against sanctions.

But in a sign that the Americans and the Afghan government disagree over the issue, Mr Khalilzad, after a recent meeting with Russian officials, said they would seek ways to ease Taliban travel. “We will explore options for securing UN travel waivers for Taliban negotiators to participate in peace talks,” Mr Khalilzad said.

One thing that could complicate a next step in peace talks is a lack of consensus between President Ashraf Ghani’s government and an array of Afghan political movers who are critical of his leadership. The two sides have publicly disagreed over issues including how to deal with the Taliban’s refusal to meet the government and the makeup of any negotiating team if the Taliban do eventually agree to such formal talks.

Mr Ghani has called for a Loya Jirga – a traditional grand council gathering – next month that would include about 2,000 Afghan representatives from across the country to provide advice on how to move forward. Mohammed Umer Daudzai, Mr Ghani’s special envoy for peace, said he hoped the large meeting would create some consensus among disagreeing Afghan factions and define the red lines for future negotiations with the Taliban.

He also expressed gratitude to the countries that made it possible for Baradar to attend the talks in Qatar. “Mullah Baradar is a person with authority, and he has influence among the Taliban,” he said. “His travel to Doha can accelerate the peace process.” – New York Times