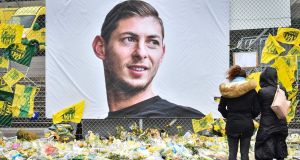 The plane that crashed in the English Channel carrying the Cardiff City footballer Emiliano Sala fell thousands of feet in the space of 20 seconds after making a 180-degree turn, minutes after the pilot requested a descent, air accident investigators have found.

The wreckage of the Piper Malibu light aircraft was found on the seabed 30 metres from where final radar readings located it at an altitude of 488 metres, suggesting it had dropped almost vertically in its final moments, according to an interim report from the UK’s Air Accident Investigations Board (AAIB).

Investigators have not concluded what caused the plane to crash, but the pilot requested a descent four minutes earlier, apparently to avoid cloud and maintain vision.

Unconfirmed radar readings indicate the plane may have climbed rapidly before its final descent.

The AAIB said its ongoing investigation would focus on trying to understand the radar readings from the last moments of the flight, as well as analysing the possible contribution of bad weather.

Investigators have also queried the legal status of the flight and the pilot’s licence to carry Sala.

Sala (28) died of head and trunk injuries, according to a postmortem examination, when the aircraft crashed at 8.16pm on January 21st on its way from Nantes to Cardiff.

The missing pilot, David Ibbotson, 59, has yet to be located.

The wreckage of the fuselage – in three pieces, with wings and tailfin missing – was found on the seabed 68 metres below the surface off Guernsey in the Channel Islands on February 3rd. Sala’s body was recovered and identified three days later.

Challenging weather conditions had made it too difficult to recover the plane wreckage from the sea, and instead the AAIB had obtained evidence from the extensive video captured by a remotely operated underwater vehicle.

Sala was the only passenger on the private aircraft flying to the Welsh capital from Nantes, where he had visited teammates from the French football club to say farewell after his £15m (€17.9 million) transfer to Premier League Cardiff.

The family of Mr Ibbotson, from Crowle in Lincolnshire, hope that a fresh search for his body will begin this week, after an online crowdfunding campaign raised more than £250,000. – Guardian