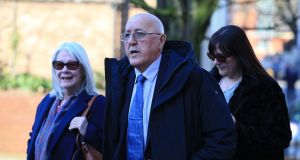 Barry Devonside, whose son was killed in the Hillsborough stadimum disaster, arrives at Preston crown court on Monday for the trial of David Duckenfield and Graham Mackrell. Photograph: Peter Byrne/PA Wire 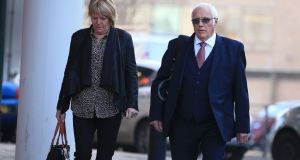 A father whose two teenage daughters were killed in the Hillsborough stadium disaster has told a court that the worst moment of his life was having to decide whether to go in an ambulance with one of them while her sister was still lying on the pitch.

Trevor Hicks had gone to the FA Cup semi-final between Liverpool and Nottingham Forest at Sheffield Wednesday’s ground on April 15th, 1989, with his then wife, Jenni, and their daughters Sarah (19) and Victoria (15) as members of the Liverpool supporters’ club’s London branch.

Almost 30 years later, he and another father, Barry Devonside, whose son Christopher (18), was killed at Hillsborough, gave evidence at Preston crown court on Monday at the manslaughter trial of David Duckenfield, the South Yorkshire police chief superintendent in command of the match.

Mr Hicks recalled telling a senior police officer that he could see the central “pens”, 3 and 4, of the Leppings Lane terrace were very full and that “things are going badly wrong”.

Asked by Christine Agnew QC, for the prosecution, about the officer’s response, Mr Hicks recalled: “He told me: ‘Shut your f**king prattle.’”

As he grew increasingly concerned, Mr Hicks said, he saw Victoria being carried up out of pen 3. He made his way down to the pitch and found his daughters there, laid side by side, with two doctors and two off-duty Lincolnshire police officers trying to revive them.

Mr Devonside said that as the disaster unfolded, some police officers were trying hard to help people in distress, while others were pushing people back into the pens. He said there was “a cavalcade” of about 100 police officers who offered no assistance.

Both men recalled that at the FA Cup semi-final played at Hillsborough between the same clubs the previous year, police on the approach to the Leppings Lane turnstiles checked that people had tickets before allowing them to proceed. Mr Devonside also remembered that a tunnel facing incoming supporters, which led to pens 3 and 4, was closed by stewards, who told him the pens were “chock-a-block”.

The jury has heard that in 1989, when Mr Duckenfield was in command, police did not check tickets on Leppings Lane and a large crowd built up at the turnstiles. At 2.52pm, Mr Duckenfield ordered a large exit gate, C, to be opened, allowing in a large number of people to alleviate the crush. Most of the 2,000 incoming people went down the tunnel, and the lethal crush took place in the central pens.

Mr Devonside said that from his seat in the North Stand, as the disaster unfolded, “I became literally, from head to foot, frozen in fear for Chris”.

Mr Hicks recalled that he and others took Victoria to an ambulance that had arrived on the pitch, and he had to decide whether to go with her to the hospital. “That was probably the worst moment of my life,” he said. “I had two daughters, only one with me. Obviously they both needed attention, we thought they were both alive.”

He went with Victoria to the hospital, but Sarah was not taken there in an ambulance. Eventually he and Jenni went back to the gymnasium at Hillsborough, which the South Yorkshire police were using to keep the bodies of those who had died – including Victoria, who had been taken there.

Mr Devonside said he spent five hours going to hospital, then to two mortuaries, before finally returning to the gymnasium at 11pm, where he identified his son. “Chris had been there all of that time,” he said. He criticised a police officer who met him at the gymnasium. “He talked to me as though I was the dirt on his shoes,” Mr Devonside said. “He more or less shouted at me.”

Stephen Allen, a Liverpool fan who was a Metropolitan police officer at the time, gave evidence about the “very intense” force of the crush in pen 3, people “shouting in agony” and screaming, then his efforts to pull people out of two piles of dead bodies at the front of the pen.

Mr Duckenfield (74) denies gross negligence manslaughter in relation to 95 of the people who were killed. Graham Mackrell (69), the Sheffield Wednesday club secretary and safety officer at the time of the disaster, denies breaching a condition of Hillsborough’s safety certificate, and breaching a duty under the Health and Safety Act.