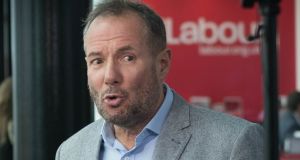 Derek Hatton, who has been suspended from the British Labour Party just days after being readmitted. Photograph: Stefan Rousseau/PA Wire

Derek Hatton, the controversial former deputy leader of Liverpool council, has been suspended from the British Labour Party just two days after being allowed back in after 34 years.

The 71-year-old has been suspended pending an investigation into a tweet he posted in 2012 blaming Jews for Israeli government policy.

The tweet, which resurfaced since he was readmitted to the party on Monday, said: “Jewish people with any sense of humanity need to start speaking out publicly against the ruthless murdering being carried out by Israel! ”

Drawing attention to the tweet, the Labour MP Ian Austin said: “Keen to address the Jewish community’s concerns and widespread worries that the Labour party has been taken over by a sectarian hard-left faction, the party yesterday readmitted Derek Hatton.”

A Labour source said: “Derek Hatton was given provisional membership, pending NEC approval. The party was not aware of this material. Once this was brought to our attention he was suspended pending the NEC’s decision.”

Mr Hatton was expelled from the party for being a member of the Trotskyist grouping Militant. He was deputy leader of the Militant-controlled council that set an illegal budget in Liverpool in protest at local government spending cuts made by Margaret Thatcher’s government. On Monday it emerged he had been told he could apply to become a member again.

Despite the intervening decades, Mr Hatton – who was viewed as the effective leader of Militant in Liverpool despite being deputy council leader – can still prompt strong reactions across the city. The timing of his return particularly angered centrist Labour supporters because it coincided with the resignation from the party of the Liverpool Wavertree MP, Luciana Berger, over allegations of institutional anti-Semitism.

Mr Hatton remains a pariah in many corners of the Labour Party. Speaking in a House of Commons debate on anti-Semitism on Wednesday, the Labour MP Barry Gardiner said the decision to let him return to the party was a “travesty”.

Mr Gardiner said he was aware of Mr Hatton’s 2012 tweet, and said in reply to another MP: “I wrote to the general secretary of our party, I lodged a formal complaint, I understand that action has since been taken in respect of the complaint and I am sure that I will be looking out to see precisely what appropriate action is taken in due course.

“I totally agree with you, I think it was a travesty. Many of us knew for some while that he had applied to rejoin the party, but for the news of his readmission to come to public attention on the day, on the very day when some members of our party were forced out I think was appalling.” – Guardian