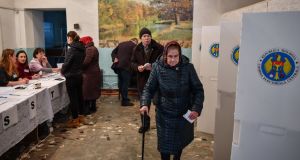 Moldova faces political uncertainty after a bruising election created a deeply fractured parliament riven by accusations of vote-rigging and the alleged poisoning of pro-western opposition leaders.

With almost all votes counted from Sunday’s ballot, the pro-Russian Socialists were poised to take 35 seats, ahead of the ruling Democrats with 30 and the pro-western Acum alliance on 26. The eponymous party of controversial businessman Ilan Shor was set to claim seven mandates, with three independents taking the last of the 101 seats in parliament.

The results leave all three main parties well short of a majority and raise the prospect of a long period of political paralysis and possible repeat elections, given the major differences and hostility that divide the Socialists, the Democrats and Acum.

President Igor Dodon, a former leader of the Socialists who shares their desire for closer ties with Russia, said “The risk is high that it could come to a snap election in the next few months.”

Mr Dodon said he would only nominate a prime ministerial candidate who could command a clear parliamentary majority, and not a minority coalition or an alliance of a major party with deputies who decide to leave their current parties.

That appeared to be a warning to the Democrats and their leader Vladimir Plahotniuc, Moldova’s richest man, who has previously managed to cobble together unlikely alliances by persuading deputies from other parties to join his ranks.

Mr Plahotniuc said the Democrats were “ready for negotiations with parties and independent candidates . . . to secure a majority and a functioning government. The first meeting will take place in the coming days.”

“We are not feeling offended by anyone. There are no politicians with whom we could not hold discussions,” Moldova’s Newsmaker website quoted him as saying.

Maia Sandu and Andrei Nastase, the leaders of Acum, refused to accept the results of “the blackest page in Moldova’s electoral history” and demanded an investigation into what they described as massive fraud, with people allegedly being paid to vote and cast multiple ballots.

On the eve of the election, Ms Sandu and Mr Nastase published medical results showing abnormal levels of mercury in their blood and suggested they were being poisoned on the orders of the Democrats – a claim the party flatly denies.

The Socialists and the Democrats also accused each other of vote-rigging, and specifically of bussing people in from the Russian-backed separatist region of Transdniestria to cast ballots in exchange for cash.

International observers led by the Organisation for Security and Co-operation in Europe said the elections “were competitive and fundamental rights were generally respected” despite “allegations of pressure on public employees, strong indications of vote buying and the misuse of state resources”.

The EU froze funding to Moldova last year after its courts used a technicality to cancel Mr Nastase’s victory in the Chisinau mayoral election, and the European Parliament said the country’s rule of law was “being undermined by the ruling political leaders colluding with business interests and unopposed by much of the political class and the judiciary”.