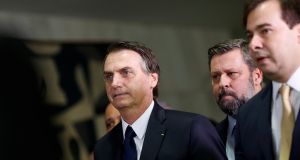 Brazil’s president Jair Bolsonaro: at a time when he is supposed to be enjoying his political honeymoon, his authority is already visibly diminished. Photograph: Adriano Machado/Reuters

Any new administration grappling with the reality of governing a country as large and complex as Brazil deserves some settling-in time.

Newly appointed ministers and senior officials need a chance to get across their portfolios. A few early hiccups are to be expected while everyone gets up to speed.

But hiccups do not accurately describe events marking the early weeks in office of Brazil’s new far-right president Jair Bolsonaro. Words such as crisis, chaos and pandemonium have been used instead. Even while acknowledging his new government is short on executive experience and political nous, its performance since January 1st has been alarmingly poor.

Some of this might be explained away by the president’s still-ongoing recovery from his stabbing at a campaign rally in September. He looked weak and unwell during his much-derided debut on the international stage at Davos. Shortly afterwards he was back in hospital for a third round of major surgery since the attack that almost killed him.

In his absence some of his cabinet pushed ahead with ambitious reforms while others preferred to squabble and contradict each other as Bolsonaro sought to run the country from intensive care.

But the biggest crisis so far of the fledgling administration was characterised not by an absence of presidential initiative but by an intemperate – and dishonest – intervention by Bolsonaro in a scandal involving his Social Liberal Party. The affair started with media revelations that last year the party ran cut-out candidates in order to defraud public campaign financing funds.

It was a troubling accusation for a politician who ran as an anti-politician come to clean out Brasília’s Augean stable, and Bolsonaro and his sons quickly turned on the Social Liberals’ leader Gustavo Bebianno. He tried to ride out the storm, saying he was in discussions about it with Bolsonaro. But this was quickly denied by the president’s hot-headed son Carlos, a claim subsequently backed up by his father.

Bebianno was eventually forced to quit his position as the only civilian minister with a desk in a presidential palace now dominated by generals. Afterwards, audio emerged which proved he was telling the truth about having discussed his situation with Bolsonaro.

There is also something darkly ironic in the Bolsonaro clan’s reaction to a corruption allegation against someone who was until recently a close family advisor, considering the other major corruption scandal to engulf the fledgling administration involves Carlos’s brother Flávio.

Elected a senator last year on his father’s coattails, his murky financial affairs while sitting in Rio’s state assembly are now being investigated by public prosecutors. The evidence of illicit enrichment that has emerged so far is compelling, as is the inability of Flávio and a former adviser to offer a minimally credible explanation for the millions they suspiciously moved through bank accounts.

Any Brazilian not caught up in the delirium that lifted Bolsonaro to the presidency will be unsurprised by the revelations about Flávio.

Before the election Brazil’s media pointed out how wealthy the Bolsonaro clan – with father and three sons all in elected office – had become out of politics. Fake news, screamed the family, and a majority of electors either believed them or did not care, so strong was their their desire to prevent the left returning to power.

Now they are running the country with the added scrutiny this brings, and the clan’s modus operandi has left many senior figures in the administration uncomfortable – with the generals that dominate cabinet reported to be particularly unhappy.

Their ire has focused on Bolsonaro’s sons, who have shown themselves to be by turns ideologically extreme, aggressive, boastful and apparently unaware that the presidential family cannot continue to comport itself the same way it did when an inconsequential if grasping clan isolated on the political fringes.

This is what is so striking about the new administration. Its instability comes not from the president’s inability to better impose discipline on his team, but rather on himself and his domineering sons.

As a result, at a time when he is supposed to be enjoying his political honeymoon, his authority is already visibly diminished.

And in Brazil, weak presidents struggle to serve out their term.