The outsider candidate with a vital message for Democrats 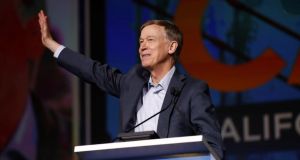 The next US presidential election may be 17 months away, but the race to become the Democratic nominee is well under way.

In echoes of the Republican campaign for 2016, which saw dozens compete to become the party’s nominee, this time it’s Democrats who are jostling in a crowded field. Twenty-four candidates have thrown their hat in the ring, arguing that they are the right person to take on Donald Trump in 2020.

Although the entry of Joe Biden into the race in April changed the dynamic of the contest as he rapidly became the frontrunner, it’s early days.

One of the presidential hopefuls is John Hickenlooper. This week the former Colorado governor brought his wares to Washington, where he addressed the National Press Club.

In such a crowded field it’s tricky to stand out from the crowd. Hickenlooper can’t even depend on being the candidate with the unusual name – he has tough competition in this regard from Pete Buttigieg, the youthful mayor of South Bend, Indiana, who is now widely known as “Mayor Pete” such is the confusion about the pronunciation of his Maltese surname.

But while Hickenlooper may not be a household name, he comes to the table with a respectable political record.

A former two-term mayor of Denver who was governor of Colorado between 2011 and 2018, Hickenlooper is popular in his home state. He presided over a strong economy and left office having implemented a range of progressive social measures such as the legalisation of marijuana and the expansion of pre-kindergarten education.

He has an interesting personal story to boot – having been made redundant as a geologist in the 1980s, he started a brewery business in a neglected area of downtown Denver, before running for mayor.

Though the genial 67-year-old is trailing at about 1 per cent in the polls, he made no apologies about his decision at his event in Washington. “I am the only person running who has actually done what everyone else is talking about.”

He promptly turned his attention to Bernie Sanders, lambasting the vision of “democratic socialism” outlined by the Vermont senator earlier in the week.

“I fundamentally disagree that we should do away with the Democratic regulated capitalism that has guided this country for over 200 years,” he said, criticising his colleagues for not calling Sanders out.

“Democrats must say loudly and clearly that we are not socialists. If we do not we will end up helping to re-elect the worst president in American history,” he said, correctly pointing out that Republicans are effectively using the socialist label to attack Democrats in the run-up to the election.

Instead, Hickenlooper, a self-made millionaire, is firmly positioning himself as a centrist. Pointing to his experience in governing Colorado, he said that “sometimes you have to talk to Republicans”. American capitalism has to be reformed, he said, but this can’t be done by “endlessly expanding government or by demonising the private sector”.

His message is that Medicare for all – the idea of a universal, government-paid healthcare programme – and the Green New Deal – a climate-conscious government investment programme – are pie-in-the-sky policies which won’t wash with most Americans.

Nonetheless, for all his big ideas, Hickenlooper is unlikely to make the cut when the Democratic field whittles down. Though he just reached the threshold to qualify as one of the 20 Democratic candidates taking part in the first debate later this month in Miami, he faces formidable competition from better-known candidates such as Biden, senators Kamala Harris and Elizabeth Warren and former Texas congressman Beto O’Rourke.

This is not stopping him from trying, however. He has made several trips to early-voting states like Iowa, New Hampshire and North Carolina since announcing his candidacy in March.

His sunny brand of optimism is refreshing. It also offers some lessons for those who are more likely to be in the race for the long haul.

Over the past few months, he said, he has been struck by how consistent voters’ concerns are in each state – healthcare is the top-ranking issue, he says, followed by climate change and economic stability. “We’ve gotten to a place in this country that a majority of Americans don’t think they’re going to be better off than they are in 10 years than they are today,” he says.

As Democrats begin the process of deciding who is best-positioned to win back the White House in 2020, taking those concerns on board is vital if the party wants to connect with voters.