Boris Johnson calls for withdrawal agreement to be broken up 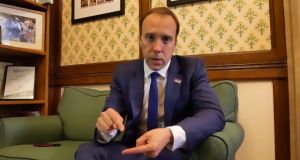 Boris Johnson has called for the withdrawal agreement to be “disaggregated” so that parts of it can be implemented but the Northern Ireland backstop would be replaced with alternative arrangements to keep the Border open. Mr Johnson was speaking a day after he topped the poll in the first round of voting by MPs in the contest to succeed Theresa May as Conservative leader and prime minister.

“I think it is perfectly realistic. And there is a clear way that the now effectively defunct withdrawal agreement can be disaggregated. The good bits of it can be taken out. I think what we should do is take the provisions on citizenship, take the offer that we make to the 3.2 million EU citizens in our country and just do it,” he told the BBC.

“The fundamental flaw in the current withdrawal agreement, which everybody understands, is the Irish backstop arrangements. That’s a prison, that’s Hobson’s choice.”

Mr Johnson said that “maximum facilitation” techniques could be used to check goods away from the Border, although the European Commission maintains that effective technology has not yet been developed.

“There is already smuggling across that border and smugglers are intercepted in the normal way. There are ways of doing this that do not require a hard border,” he said.

“The solutions to the facilitation that need to be provided to enable us to do a proper free trade deal with our friends and partners, those should not be preordained by the backstop. But they should be remitted into the implementation period for discussion after we have left it in the context of negotiation of the free trade deal.”

Mr Johnson was speaking after health secretary Matthew Hancock withdrew from the leadership contest, leaving six candidates competing to be among the final two to go before party members. Mr Hancock, who received just 20 votes in Thursday’s ballot, said he would speak to the remaining candidates before deciding whom to support.

“I ran as the candidate of the future, but the party is understandably looking for a candidate for the unique circumstances we face right now,” he said.

Mr Johnson confirmed that he would take part in a candidates’ debate on BBC television next Tuesday but he will not participate in Sunday’s Channel 4 debate. Mr Johnson is also alone among the six candidates in refusing to face questions from Westminster Lobby journalists next Monday.

“I must have received dozens and dozens of invitations to do hustings here, there and everywhere, and debates of all kinds. But as I say, I think there can be a risk of a slight cacophony when you have lots and lots of candidates, but also the impression of yet more blue on blue action. When I think what the public wants to hear is a serious debate,” he said.

“I’m very keen on TV debates and did many, many if people remember, in the run-up to London mayoral elections. I think, by the end, a certain sort of narcolepsy had descended on the TV audience.”