High-profile convictions against backdrop of broader crackdown on campaigners 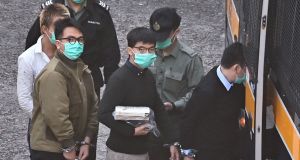 Wong (24) was convicted of organising, participating in and inciting others to take part in an unauthorised assembly when protesters surrounded police headquarters last year.

Agnes Chow (23) and Ivan Lam (26), two former leaders of Wong’s disbanded political group Demosisto, were also convicted in connection with the demonstration after pleading guilty to some charges against them. Chow was sentenced to 10 months and Lam for seven months.

The high-profile convictions came against the backdrop of a broader crackdown in recent weeks, following the imposition of a sweeping national security law in June.

The charges against Wong, Chow and Law relate to an incident that predated the new measures. But critics said the vaguely worded and wide-ranging law has eroded the high degree of autonomy granted to the territory following its handover from the UK to China in 1997 and been used by authorities to crack down on the opposition.

Authorities have also acted against teachers for allegedly discussing sensitive topics with school students. In a separate case, an education official said he resigned under political pressure over a test question that asked students to discuss Japan’s role in Chinese history, according to local media. The Hong Kong Examinations and Assessment Authority denied he was forced to resign.

A journalist at RTHK, the public broadcaster, was arrested after alleging that police had failed to protect civilians under attack from a mob in July last year.

Wong and Lam appeared upbeat ahead of the sentencing, waving to supporters as they entered the court, while Chow kept her head down. “It’s not the end of the fight,” Wong said via his lawyers after his appearance.

Jonathan Man, a lawyer for Wong, said the activists had hoped for shorter sentences as they had not been involved in violence.

“This is shocking . . . it’s out of the reach of their imagination,” he said, pointing out that defendants in previous cases had been given financial penalties or forced to perform community service.

Mr Man said Chow had already signalled she would appeal the sentence, while Wong and Law were considering whether to follow.

He added that Chow, whose birthday is tomorrow, was struggling emotionally. “She didn’t take it very well . . . she has to spend her birthday behind bars,” he said.

Chow is also accused of violating the national security law in a separate case.

Magistrate Wong Sze-lai said it was “necessary to emphasise deterrence and punishment” in handing down the sentences, accusing Wong of challenging the authority of the police in demonstrating outside its headquarters.

Dominic Raab, UK foreign secretary, criticised the judgments and called on “Hong Kong and Beijing authorities to bring an end to their campaign to stifle opposition”.

Nathan Law, a Hong Kong activist now living in the UK, accused authorities of suppressing the “tens of thousands” of protesters who took to the streets last year in the wake of the verdict.

Separately, Jimmy Lai, the media entrepreneur and outspoken critic of Beijing, was detained by police and charged with fraud on Wednesday, according to his newspaper Apple Daily.

Mr Lai was arrested for allegedly “collaborating with foreign forces” and organising anti-government protests in August. He has denied the charges.

The national security law, combined with the Covid-19 pandemic, has largely neutralised public protest in the city, although police said petrol bombs were thrown at a sports and recreation club for officers in Kowloon on Tuesday.

Wong had been briefly placed in solitary confinement following his arrest after prison officers claimed a “foreign object” was detected in his stomach in an X-ray, according to his Facebook page.

Wong and Lam were previously jailed for their part in the 2014 pro-democracy protests. – Copyright The Financial Times Limited 2020