Alleged ‘bribery for pardon’ scheme at White House under investigation 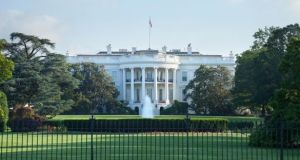 According to an unsealed court filling, the US justice department is investigating an alleged ‘bribery for pardon’ scheme at the White House. Photograph: Getty Images/File

An alleged “bribery for pardon” scheme at the White House is under investigation by the US justice department, according to a court filing unsealed on Tuesday.

The heavily redacted document does not name Donald Trump or other individuals and leaves many unanswered questions, but comes amid media reports that the US president is considering sweeping pardons before he leaves office next month.

It shows that the justice department investigation alleges that an individual offered “a substantial political contribution in exchange for a presidential pardon or reprieve of sentence”.

Two individuals acted improperly as lobbyists to secure the pardon in the “bribery-for-pardon schemes”, as the document puts it. All three names are blacked out.

On Tuesday night, a US justice department official told Reuters that no US government official is the “subject or target” of investigation into whether money was funnelled to the White House in exchange for a presidential pardon.

The watchdog Citizens for Responsibility and Ethics in Washington (Crew) tweeted in response: “It’s hard to overstate how big a deal the phrase ‘bribery-for-pardon schemes’ is.”

The document was unsealed by the district court for the District of Columbia, in Washington. Some of its 20 pages are entirely redacted, implying that revealing the details now might jeopardise an ongoing investigation.

They discuss a review by chief judge Beryl Howell in late August of a request from prosecutors for documents gathered for the bribery investigation. More than 50 digital devices including iPhones, iPads, laptops, thumb drives and computer drives were seized after investigators raided unidentified offices. It was not clear why Ms Howell decided to release the filing now.

Mr Trump last week pardoned Michael Flynn, his former national security adviser, who had twice pleaded guilty to lying to the FBI. The New York Times reported on Tuesday that Mr Trump and Rudy Giuliani, his personal lawyer, discussed as recently as last week the possibility of a “pre-emptive pardon”. Mr Giuliani tweeted a denial.

The court disclosure unleashed a whirlwind of speculation in Washington. The Democrat Adam Schiff, the chair of the House of Representatives intelligence committee, told the MSNBC network: “People shouldn’t presume - and there may be a tendency to leap to the - that this may involve some of the personalities that have been very much in the news and are worried about their criminal liability.

“It may be someone that we’ve never heard of that wants a pardon and is well-heeled and therefore in a position to make a sizeable contribution. So it doesn’t have to be any of the parties that we think that may want a pardon: the [PAUL]Manaforts, the Giulianis and others. It could be someone completely different but, at the end of the day, someone in that chain has to be close enough to the White House where they could conceivably deliver on the official act of pardon if the bribe were paid.” - Guardian/Reuters