Ethiopian forces to launch ‘final phase’ of offensive in Tigray 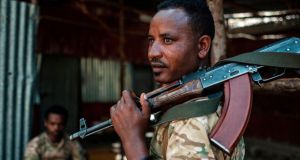 A member of the Amhara special forces holds his rifle at the 5th Battalion of the northern command of the Ethiopian Army in Dansha, Tigray region, Ethiopia. Photograph: Eduardo Soteras/AFP via Getty Images

Ethiopia’s prime minister has ordered federal military forces to launch a “final offensive” on the capital of the restive Tigray region after his 72-hour ultimatum for dissident local leaders to surrender expired.

In a statement posted on social media, Abiy Ahmed said great care would be taken to protect innocent civilians from harm and said efforts would be made by government troops to ensure the city of Mekelle, which has a population of 500,000, was not “severely damaged”.

“We call on the people of Mekelle and its environs to disarm, stay at home and stay away from military targets [and] to do their part in reducing damages to be sustained because of a handful of criminal elements,” Mr Abiy said.

Earlier this week, military officials warned of “no mercy” if residents of Mekelle did not distance themselves from the Tigray People’s Liberation Front (TPLF), the local ruling party.

By evening on Thursday, there were no reports of any attacks on the city though federal forces are believed to be within artillery range and have launched repeated air strikes across Tigray.

Debretsion Gebremichael, the leader of the TPLF, said on Tuesday his people were “ready to die” defending their homeland.

Mr Abiy launched the military campaign against the TPLF on November 4th, accusing it of attacking federal military camps in the northern region and seeking to destabilise the country.

The 44-year-old leader, who won the Nobel Peace Prize last year for his peace deal with neighbouring Eritrea, said the TPLF had orchestrated a “spate of violent attacks” across Ethiopia to “frustrate the democratisation process”.

Officials in Addis Ababa, the Ethiopian capital, describe the offensive in Tigray as a “law enforcement operation” aiming to remove “traitorous” rebel leaders and restore central authority. The TPLF says it is defending its legitimate rights under Ethiopia’s devolved constitutional system.

Podcast: Sally Hayden on the crisis in Ethiopia

Hundreds, possibly thousands, have died in the conflict so far, with up to a million people displaced. At least one massacre has taken place, with allegations of atrocities made against both sides.

Fighting on Wednesday took place near the town of Yeha, on a main road linking two strategically important crossroads at Adigrat and Adwa, as well as on the ridges overlooking the plateau on which Mekelle lies. Clashes were reported north of the town of Tsigerada, around 20km from the Tigrayan capital.

On Tuesday, fighting was reported south of Mekelle after federal forces broke through TPLF defensive lines on the main road linking the city with Amhara, the neighbouring province that served as a launchpad for the government offensive.

Analysts believe casualties on both sides have been heavy, but few reliable details of losses have emerged.

Last-minute efforts by the African Union and the United Nations to defuse the crisis have failed. Mr Abiy has rejected international “interference” and insisted that the conflict is an internal matter.

The TPLF is thought to be ready to negotiate. Tessema Fesseha Asghedom, an adviser to the party, told the BBC that the conflict was a “political and constitutional crisis” and so could only have a “political solution”.

“Let’s go to mediation . . . Any minute, any place, without any condition, we want to stop this war, the people of Tigray are dying,” he said.

The UN says shortages have become “very critical” in the Tigray region, with fuel and cash running out. Food for nearly 100,000 refugees from Eritrea will be gone in a week, according to a report released overnight, and more than 600,000 people who rely on monthly food rations have not received them this month.

The lack of fuel is critical because with electricity cut in much of the region, diesel-powered generators have become essential.

Travel blockages are so dire that the UN World Food Programme has so far been unable to transport food from its warehouses even within Mekelle.

On Thursday, a spokesperson for Mr Abiy said that humanitarian corridors would be opened under government supervision to allow aid to reach Tigray.

Communications and travel links remain severed with the Tigray region since the conflict broke out and though the UN has reported people fleeing Mekelle, it is unclear how many residents are aware of the impending assault.

More than 40,000 refugees had fled into Sudan by Thursday, according to latest data from the United Nations, but the flow has reduced dramatically in recent days. There are widespread reports that Ethiopian troops and paramilitaries are now preventing local people from reaching or crossing the border.

The head of the Ethiopian Human Rights Commission said that “extreme caution to avoid civilian harm is of even greater importance, now, at this stage of the conflict”.

Mekelle has remained a stronghold for the TPLF since the party took power nationally at the head of a coalition in 1991. But though Mr Abiy has called on the TPLF leadership to surrender to prevent the assault on the city, some analysts believe top officials are likely to have moved to remote hiding places in Tigray’s mountains and gorges.

“We don’t even know if these guys are in Mekelle. Tigray is not very big but there are lots of places to hide. It would be very foolish if they are all in a bunker in the city. They are probably scattered, with some kind of communications system, and hiding, looking to transition to a people’s [guerrilla] war,” said Yohannes Woldemariam, a US-based academic specialising in the Horn of Africa. – Guardian