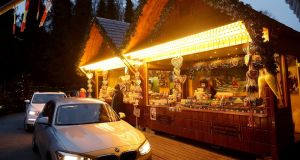 Customers sitting in their cars receiving goods at a drive-in Christmas market during the second wave of the coronavirus pandemic in Landshut, Germany. Photograph: Getty

Governments around Europe are wrestling with the difficulty of how to balance the Christmas season with the need to keep the spread of Covid-19 in check. Consequently, divisions have emerged over whether to loosen restrictions or keep families strictly apart.

In hard-hit Belgium prime minister Alexander de Croo advised that Christmas celebrations and family gatherings would have to be “smaller and more prudent” this year. “I would like us not to ruin the progress of the last four weeks over four days. We should not let this slip through our fingers,” said De Croo.

“Thousands of families will have an empty seat from a person they have lost in recent months. I would really like that when we celebrate Christmas next year, there won’t be even more families with empty seats because we haven’t been able to do what is necessary in the coming weeks.”

In Germany, most traditional Christmas markets have been cancelled this year. Chancellor Angela Merkel this week announced that restrictions introduced at the start of November that shut bars, restaurants and leisure facilities would remain in place until December 20th at least and possibly until January.

“We have two messages for the people: firstly, thank you, but secondly, that the current restrictions will not be lifted,” said Dr Merkel.

“The exponential rise in infections is broken,” she added. “But the daily cases are still far too high and our intensive care stations are still very full.”

Nevertheless, some special exceptions are to be introduced for the 10 days between December 23rd and January 1st, when restrictions on contacts with other housesholds will be eased. During that period, members of one household will be allowed to meet with up to 10 people who live elsewhere. Children under 14 are not counted.

In Italy, prime minister Guiseppe Conte announced it would be “a more sober Christmas” as negotiations got under way on whether to shift the travel restrictions between regions and partial lockdowns in place in many parts of the country.

In Spain, the government has said it will limit gatherings to six people and is expected to advise that any celebrations be held outside or on restaurant terraces, though some regional authorities are calling for looser restrictions of 10 people per gathering.

The government is also expected to advise that the traditional parade that takes place to celebrate the Feast of the Three Kings on January 5th should not take place.

“There has been an improvement across all territories but we are appealing for caution, especially this December,” said minister for health Salvador Illa. “We want to produce a set of recommendations that will generate the maximum possible consensus.”

French president Emmanuel Macron this week announced that if infections dropped to 5,000 a day, France could relax its strict national lockdown from December 15th. This would allow citizens to leave home without carrying a certificate justifying an essential reason to do so.

“The peak of the second epidemic wave has now passed,” said Mr Macron. “We must be extra vigilant, especially during the end of year holidays.”

Restaurants, bars, and sports facilities will remain closed until at least January 20th. But the stay-at-home requirement will be replaced by a national curfew between 9pm and 7am. This will be dropped on Christmas Eve and New Year’s Eve to give more freedom to visit friends and family.

Several countries that share open borders with neighbouring European states are struggling with how to manage differing restrictions on the other side of the frontier, with closed Belgian businesses expressing frustration that citizens could travel across the border to the Netherlands to do their festive spending.

The Italian government also appealed for the European Commission to issue guidance to member states on whether or not to open ski resorts. While Rome has attempted to keep slopes closed, Austria insisted they must remain open as the economic blow would be too great and parts of Switzerland declared themselves open for winter tourists.

Returning skiers are blamed for spreading Covid-19 across the continent early this year, particularly from the Austrian ski resort of Ischgl which was linked to cases in some 45 countries.

“Relaxing too fast and too much risks a third wave after Christmas,” said European Commission president Ursula von der Leyen this week. “This Christmas will be different. And yes, it will be quieter.”