‘It has to stop’: Republican Georgia election official lashes out at Trump

Georgia's voting system implementation manager, Gabriel Sterling, has called on Donald Trump to "stop inspiring people to commit potential acts of violence" as the US president continues to dispute the results of the US election. Video: Reuters 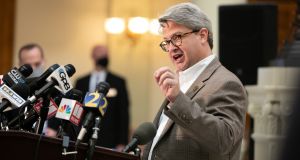 Gabriel Sterling, a Republican and Georgia’s voting system implementation manager: “This is elections. This is the backbone of democracy, and all of you who have not said a damn word are complicit in this. It’s too much.” Photograph: Jessica McGowan/Getty Images

In one of the most striking rebukes to US president Donald Trump since he launched his baseless attacks on the American electoral process, a top-ranking Georgia election official lashed out at the president on Tuesday for failing to condemn threats of violence against people overseeing the voting system in his state.

“It has to stop,” Gabriel Sterling, a Republican and Georgia’s voting system implementation manager, said at an afternoon news conference at the state Capitol, his voice shaking with emotion. “Mr President, you have not condemned these actions or this language.”

He added: “This is elections. This is the backbone of democracy, and all of you who have not said a damn word are complicit in this. It’s too much.”

Mr Sterling’s outburst of anger and frustration came amid a sustained assault on Georgia’s election process by Mr Trump as he seeks to reverse his loss to his Democratic rival, former vice-president Joe Biden. Mr Sterling, who previously said he had received threats himself, said that threats had also been made against the wife of his superior, Brad Raffensperger, the Republican secretary of state.

Mr Sterling also called on the state’s two Republican senators, David Perdue and Kelly Loeffler, to stop supporting Mr Trump’s claims of fraud and to condemn the rhetoric that he said was getting dangerously out of hand. The two senators, both Trump loyalists, have called for Mr Raffensperger to resign.

As Mr Trump hurls false claims of fraud in Georgia, a number of lawsuits filed by conservatives in state and federal courts are seeking to decertify the results. The second of two recounts requested by the Trump campaign is expected to wind up on Wednesday. And the Georgia Republican Party has descended into a state of virtual civil war as some of its most powerful players manoeuvre and malign their rivals, seeking advantage, or at least survival.

In the meantime, Mr Trump continues to lash out at governor Brian Kemp and Mr Raffensperger, both staunch Republicans and Trump supporters, over the fact that he lost Georgia, saying they have not sufficiently rooted out fraud.

As late as Tuesday morning, Mr Trump made the latest in a series of unsubstantiated claims about the Georgia election, writing on Twitter that the state had been “scammed” and urging Mr Kemp to “call off” the election.

Some of Mr Trump’s supporters have taken to the streets and the Capitol building in downtown Atlanta, where conspiracy theorist Alex Jones of Infowars recently joined them. In other cases, Trump supporters have harassed or threatened Mr Sterling, Mr Raffensperger and others.

In a statement on Tuesday evening, Tim Murtaugh, a spokesman for the Trump campaign, said: “The campaign is focused on ensuring that all legal votes are counted and all illegal votes are not. No one should engage in threats or violence, and if that has happened, we condemn that fully.”

Amid all of this, Mr Sterling, a detail-oriented former city councilman from the Atlanta suburb of Sandy Springs, has taken on a prominent role in the state as it conducted its recounts. Along with Mr Raffensperger, he has often been the main speaker in numerous news conferences in which he has explained the complexities of Georgia’s election and recount systems and has argued that the results, which currently show Mr Biden winning by about 12,700 votes, are trustworthy.

Ari Schaffer, press secretary for the secretary of state’s office, did not answer directly when asked on Tuesday whether Mr Raffensperger had given Mr Sterling his blessing to speak out so forcefully against the president. But he noted that the deputy secretary of state, Jordan Fuchs, had been standing near Mr Sterling when he made his statements.

“Gabriel has my support,” Mr Fuchs said independently in a text message.

Late on Tuesday, representatives for Mr Loeffler and Mr Perdue said they condemned violence of any kind but also said they would not apologise for seeking accountability and accuracy in the state’s elections.

In the second of two news conferences called by the secretary of state’s office on Tuesday, Mr Sterling, speaking loudly, emotionally and deliberately, said that people had intruded on Mr Raffensperger’s personal property. He said that Mr Raffensperger’s wife “is getting sexualised threats through her cellphone”. He mentioned that he had police protection outside his own house, a topic he had also broached in a November 21st tweet.

“So this is fun . . . multiple attempted hacks of my emails, police protection around my home, the threats,” Mr Sterling wrote then. “But all is well ... following the law, following the process ... doing our jobs.”

On Tuesday, Mr Sterling also made references to reports that Joe diGenova, a lawyer for the Trump campaign, had said that Chris Krebs – a former federal cybersecurity official who vouched that the election was clean – should be shot. (DiGenova later said his remarks had been “made in jest”.)

But Mr Sterling said that “the straw that broke the camel’s back” had involved a threat against a 20-year-old contractor for a voting system company in Gwinnett County. He said the young worker had been targeted by someone who hung a noose and declared that the worker should be “hung for treason,” simply for doing a routine element of his job. Mr Sterling did not provide any other details.

“I can’t begin to explain the level of anger I have right now over this,” he said. “And every American, every Georgian, Republican and Democrat alike, should have that same level of anger.”

Details of the noose incident Mr Sterling cited could not be corroborated on Tuesday. – New York Times