Large ketamine seizure in Thailand turns out to be cleaning agent 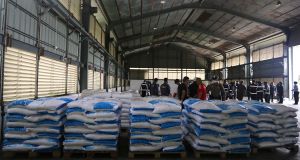 Thai police inspect a seizure of what was thought to be Ketamine on November 12th. Photograph: EPA.

Thailand has said what it thought was a seizure of $1 billion worth of ketamine has turned out to be a chemical used in cleaning products.

Tests on the seizure have so far not shown up any drugs, the justice minister said on Tuesday.

Somsak Thepsuthin said tests which turned purple in the presence of ketamine hydrochloride reacted the same to trisodium phosphate - a chemical which can be used as a food additive and cleaning agent which is all that had been found so far.

“This was a misunderstanding that our agency must accept,” he told reporters. “This wasn’t a mistake. It’s new knowledge.”

He said testing continued. Some 66 of 475 bags had been tested by Sunday.

Thailand’s Office of the Narcotics Control Board had announced the seizure on November 12th and said that it pointed to a multinational drug network.

In medicine, ketamine is used as an anaesthetic or an anti-depressant, but as a recreational drug it is used to induce dreamy or trance-like sensations, and sometimes hallucinations.