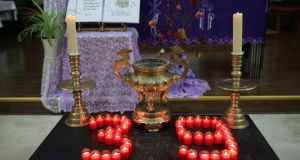 Candles laid out as part of the ceremony for the mass prayer and vigil for the 39 victims found dead inside the back of a truck in Grays, Essex, at The Holy Name and Our Lady of the Sacred Heart Church, London’s Vietnamese church, in east London. Photograph: Yui Mok/PA Wire

Members of the Vietnamese community gathered in London for a vigil in memory of the 39 people found dead in a lorry in Essex.

The service on Saturday evening was attended by more than 100 people at the Church of the Holy Name and Our Lady of the Sacred Heart in east London.

Candles arranged to read “39” were at the foot of the altar ahead of the service in the Catholic church, which has a large Vietnamese congregation.

The Rev Simon Nguyen said: “Today we gather to remember the people who have departed.

“These people who used to live among us, who dined with us.

“Today they are no longer with us.”

Members of the congregation performed readings as part of the vigil and candles were lit.

Addressing the congregation, Mr Nguyen said: “Yesterday the police in Essex announced all the victims were Vietnamese.

“We show our condolences and sympathies for the people who have lost their lives on the way seeking freedom, dignity and happiness.

“We ask God to welcome them into his kingdom even though some of them were not Catholic but they strongly believed in eternal peace, so we pray for them.

“We pray for those who have lost their sons and daughters, their loved ones at this very challenging time.”

After the service, Mr Nguyen said the incident had affected the Vietnamese community internationally.

He said: “We couldn’t believe such tragedy could happen and the pain these people had to suffer before they died.

“The whole community is in shock. It is shocking every single day because of the more news and more information about the tragedy, they suffering of these people. It is very painful for these victims and their families at home.”

The east London church has assisted with the investigation into the tragedy, including working with the police.

“I try to spread the news to all the people both Catholic and non-Catholic to come forward if they need any help and we can collect all the information,” he said.

He added the community had stood together and helped provide the information they could.

“The people here are very united because we are all refugees,” Mr Nguyen continued.

“All the people here, most of the Vietnamese, came here as refugees in the 70s and the 80s and the 90s, but their disappearances were not reported by the media, but many of them died in this way.

“These victims, this tragedy was reported but many tragedies to the Vietnamese no one knows.”

On Friday, Essex police announced that it believed all the victims were Vietnamese after previously stating it was thought they were Chinese.

A spokeswoman for Vietnam’s ministry of foreign affairs called the incident a “serious humanitarian tragedy” in a statement on Saturday. – PA

1 Luke ‘Ming’ Flanagan bares his bottom half to European Parliament
2 Gardaí investigate Dublin Black Lives Matter protest over Covid-19 rule breach
3 Miriam Lord: Not a bare ankle, hairy knee or a Ming the Trouserless to be seen at Covid committee
4 Programme for government must include 'fiscal responsibility' – Varadkar
5 Church of England rules Irish inscription on grave stone must have translation
Real news has value SUBSCRIBE