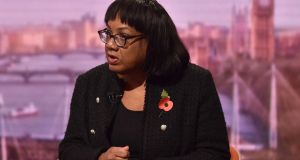 Diane Abbott has spoken out about how she deals with online vitriol after a growing number of female MPs announced they will not be standing in the UK general election with some citing the abuse they face in public office.

Labour’s shadow home secretary, who, a study found, was subject to nearly half of all abusive tweets sent to female MPs, said she copes with it by “putting one foot in front of the other”.

Abbott is calling for social media giants to record the real identity of people using their platforms to help clamp down on the problem. It comes as the cabinet minister Nicky Morgan shocked Westminster by saying she would not be standing as a candidate, referencing among reasons “the abuse” she received for “doing the job”.

The former home secretary Amber Rudd is also among moderate Tory MPs who have said they will not fight the election, as well as the ex-minister Claire Perry and Theresa May’s former de facto deputy David Lidington.

Heidi Allen, the former Tory MP who defected to the Liberal Democrats, also said she will not stand as she highlighted “the nastiness and intimidation that has become commonplace”.

Asked about online abuse, Abbott told BBC Radio 4’s Today programme: “A lot of people try to make party political points or factional points about this, what I say is the huge rise in online abuse – and obviously it’s addressed more to women than anybody else – has to do with anonymity online and my view is we should make it harder for people to be anonymous online.

“They can have an anonymous identity but the website, Twitter, Facebook, should have their real name and address. I believe that the fact that people are completely anonymous has made this problem worse.

“When we try, when the police try and track down people who are abusing me, they find they can’t identify them. If Twitter, Facebook, and online had the people’s real name and address I think you’d be able to crack down on this.”

Liberal Democrat MP Sarah Wollaston, who defected from the Tories, told the Today programme: “If you look at the nine Conservative women who are standing down who are part of the 2017 women elected to the Conservative party, five of them are aged 50 or under... [The parties] should be looking very carefully at why women are stepping down at a younger age and having served for far shorter time in parliament.”

Abbott also called for the Labour MP Keith Vaz, who was exposed for offering to buy drugs for male prostitutes, not to stand as a candidate for the party in the general election.

Vaz, among the first ethnic minority parliamentarians when he was elected alongside Abbott more than 30 years ago, was subject to a tabloid story which claimed he offered to purchase cocaine for sex workers while posing as an industrial washing machine salesman.

An official inquiry by the Commons standards body this week recommended he be suspended from parliament for six months after finding there was “compelling evidence” he offered to pay for the class A drug and had paid-for sex in August 2016.

But after the MP received support from his local constituency association in the event he decides to stand again, Abbott has urged Vaz to consider his position. “I’ve known Keith for a very long time. We were young people together looking to go forward in the Labour party. I think he should consider his position and I think he himself should agree not to be a candidate,” she told BBC Radio 4’s Today programme.