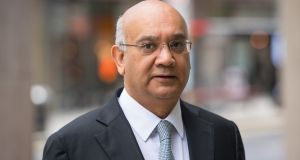 Labour MP Keith Vaz has been suspended from the Commons for six months after he was found to have “expressed willingness” to buy cocaine for male prostitutes.

The Standards Committee found the MP had caused “significant damage” to the reputation of the House.

The committee, the Commons disciplinary body, said his explanation that he may have been given a “spiked” drink and that he was suffering from amnesia was “not believable and, indeed, ludicrous”.

Shadow home secretary Diane Abbott said Mr Vaz should now stand aside as the Labour candidate for Leicester East, the seat he has held since 1987.

“I think he should consider his position.

“I think he himself should agree not to be a candidate,” she told the BBC Radio 4 Today programme.

“It has been a very sad issue, not just for him but for his family and his children.”

When it was put to her that Mr Vaz, who was chairman of the Commons Home Affairs Committee at the time of the incident, had not had the Labour whip withdrawn, she replied: “Not yet.”

A statement on Mr Vaz’s website said that he was admitted to hospital on the day the committee’s report was published.

It said he had been receiving treatment for a “serious mental health condition” since details of the encounter were published in the Sunday Mirror in 2016. – PA