38-year-old Jarrod Ramos shot and killed at least five people and injured several at a Maryland newspaper on Thursday (June 28), in one of the deadliest attacks recorded on a US media outlet. 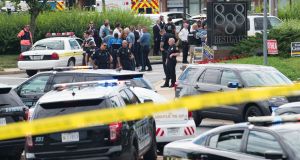 Police respond to a shooting at the offices of the Capital Gazette, in Annapolis, Maryland, the US. Photograph: Saul Loeb/AFP/Getty Images 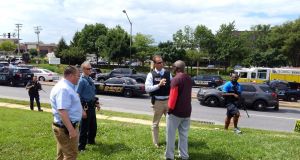 Police officers talk to a man as they respond to an active shooter inside a city building in Annapolis, Maryland, US. Photograph: Reuters/Greg Savoy 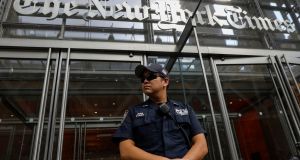 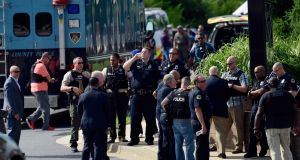 Police secure the scene of a shooting in Annapolis, Maryland, the US. Photograph: AP Photo/Susan Walsh

The gunman who killed five people and gravely injured several more in a Maryland newsroom had a long-running feud with the newspaper.

Suspect Jarred Ramos (38), who was detained by police and remained in custody, opened fire on Thursday afternoon through the glass door of the Capital Gazette’s main newsroom in Annapolis.

In 2012, Ramos brought a defamation lawsuit against a former staff writer and columnist with the publication and the then editor, according to a court filing.

In 2015, Maryland?s second-highest court upheld a ruling in favour of the Capital Gazette and a former reporter who were accused by Ramos of defamation.

According to a legal document, the article contended that Ramos had harassed a woman on Facebook and that he had pleaded guilty to criminal harassment. The court agreed that the contents of the article were accurate and based on public records, the document showed.

Ramos said on Twitter that he had set up an account to defend himself, and wrote in his bio that he was suing people in Anne Arundel County and “making corpses of corrupt careers and corporate entities.”

Police said the attack was targeted on the newspaper. “This person was prepared to shoot people. His intent was to cause harm,” acting police chief of the Anne Arundel county police department William Krampf told a news conference.

A single shooter shot multiple people at my office, some of whom are dead.

Gunman shot through the glass door to the office and opened fire on multiple employees. Can't say much more and don't want to declare anyone dead, but it's bad.

Prior to departing Wisconsin, I was briefed on the shooting at Capital Gazette in Annapolis, Maryland. My thoughts and prayers are with the victims and their families. Thank you to all of the First Responders who are currently on the scene.

Ramos has been named by the Capital Gazette but not by police, citing investigative reasons.

The victims include an assistant editor, three other journalists and a sales assistant.

Phil Davis, a Capital Gazette crime reporter, said he was hiding under his desk along with other newspaper employees when the shooter stopped firing, the Capital Gazette reported on its website.

The newsroom looked “like a war zone,” he told the Baltimore Sun, adding, “I don’t know why he stopped.”

President Donald Trump, who was briefed on the attack during a visit to Wisconsin, tweeted his response to the attacks. “My thoughts and prayers are with the victims and their families. Thank you to all of the First Responders who are currently on the scene.”

According to police in Maryland, the gunman entered the building which houses the headquarters of the Capital and Gazette newspapers on Thursday afternoon and opened fire.

There were reports that a shotgun was used, though authorities declined to give details.

A crime and courts reporter with the newspaper who witnessed and survived the attack said the gunman “shot through the glass door to the office and opened fire on multiple employees”.

The headquarters of the Capital Gazette, which is owned by the Baltimore Sun, is located in Annapolis, the capital of Maryland, about 30 miles east of Washington DC.

Maryland governor Larry Hogan said he was “devastated” at the news.

“Absolutely devastated to learn of this tragedy in Annapolis,” he tweeted, adding that he was in contact with local authorities. “Please, heed all warnings and stay away from the area. Praying for those at the scene and for our community.”

The attack is the latest mass shooting to unfold in America in the last eight months, following gun attacks in Florida, Texas and Las Vegas.

Though the wave of mass shooting have prompted call for a tightening of gun laws in the United States, there have been few changes to gun laws at a federal level.