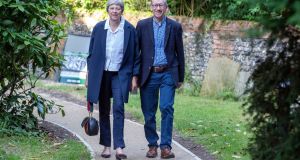 UK prime minister Theresa May and her husband Philip arrive for a church service near to her Maidenhead constituency on Sunday. Photograph: Steve Parsons/PA Wire.

Britain’s public health service has started “significant planning” to ensure medicines are still supplied to patients if the government fails to negotiate a Brexit deal with the European Union, it head said on Sunday.

Simon Stevens, chief executive of the National Health Service (NHS), said Britain’s health department was working with pharmaceutical companies to make sure there will be no breakdown in supply if there is no deal with the EU.

“There is now significant planning going on around all the scenarios including these medicines supply scenarios,” he told the BBC’s Andrew Marr Show.

“There’s extensive work under way now between the department of health, other parts of government, the life sciences industry, the pharma companies. Nobody is pretending this is a desirable situation but if that’s what we get to then it will not have been unforeseen.”

The EU warned Britain again last week that time was running out for prime minister Theresa May to negotiate a deal and stop the country from crashing out of the bloc.

Ms May has promised to thrash out an agreement with her top team of ministers at a meeting this week and intends to present a policy document, or white paper, setting out the government’s aims for a future partnership after that.

Former Northern Ireland secretary James Brokenshire has said there are “strong views” in Ms May’s cabinet about how to proceed on Brexit and that he was “confident” they can come to an agreement when they meet on Friday.

He told BBC One’s The Andrew Marr Show: “I think there’s no doubt that there is strong views on either side and that’s what I would expect as we lead into the discussions on Friday.

“But, equally, I remain confident that we will come out from that meeting with that clear direction, the White Paper that will follow, and actually setting out our vision for our future with our EU partners.”

Mr Brokenshire, now the communities secretary, repeatedly side-stepped questions on whether a single market on goods was acceptable to government.

Asked what he would say to EastEnders star Danny Dyer, who last week claimed no-one had a clue about Brexit and used robust language to attack former prime minister David Cameron, he replied: “I’m not going to engage directly with Danny Dyer’s quote but what I can say is that we want that partnership with our EU friends, colleagues and allies, both in terms of economics but also in terms of our security too.”

UK Labour leader Jeremy Corbyn said he believed the transition period after Brexit would be extended.

He told the Sky News programme Ridge on Sunday: “At the moment it’s not set in stone, it’s talked around for two years.

“I’ve got a feeling it might go beyond that.”

Asked if he would be happy with that, he replied: “Yes.”

Mr Corbyn said if Brexit is “done correctly we will have a good relationship with Europe”.

“We will be able to give to Scotland, Wales and Northern Ireland the powers of regional government that were taken away to Brussels and we can ensure that we have that good relationship.” - PA/Reuters