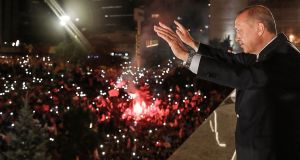 Turkish president Recep Tayyip Erdogan struck a defiant tone following his victory in elections on Sunday that have paved the way for a new presidential system granting him sweeping powers.

“There is no stopping for us until we bring Turkey, which we saved from plotters, coupists and political and economic hitmen, street gangs and terrorist organisations, to among the top 10 economies in the world,” he told supporters at a rally in Ankara in the early hours of Monday.

Pro-government media and Mr Erdogan were criticised for claiming victory in the presidential election before all votes had been counted on Sunday night, but official tallies by the high election board released on Monday showed Mr Erdogan had secured around 53 per cent of the vote.

Mr Erdogan’s ruling AK Party also claimed victory in parliamentary elections held on Sunday, taking 42.5 per cent of the vote, while its ultranationalist ally, the MHP, surpassed expectations by winning 11 per cent.

Unlike in the aftermath of last year’s tightly-fought constitutional referendum, which also went in Mr Erdogan’s favour, few protests opposing Sunday’s results were held in Istanbul or in other major cities.

In Ankara on Monday, the hundreds of police officers that filled city centre streets the previous evening had been removed following raucous celebrations by Mr Erdogan supporters that continued throughout Sunday night.

Analysts and numerous polls had predicted a tighter race, and Mr Erdogan surprised many by securing a first-round victory. Istanbul and Ankara voted for Mr Erdogan by 50 per cent and 51.5 per cent respectively, illustrating the polarised nature of Turkish society today.

However, by defeating all competitors in the first round Mr Erdogan now has a mandate to rule Turkey unencumbered in a regime he could lead for another decade.

And while he made ending a two-year-old state of emergency an election campaign promise, little pressure can now be put on him to do so.

His victory speech in Ankara in the early hours of Monday made clear that he plans to continue his campaigns against dissent and perceived enemies, including Kurds both inside Turkey and in Iraq and Syria, and supporters of Fethullah Gülen, the US-based cleric Mr Erdogan blames for a failed coup attempt in July 2016.

Turkey remains a repressive country for dissidents. Hundreds of independent media outlets have been shut down and dozens of journalists jailed. At least 73 were in prison in December last year, according to the Committee to Protect Journalists.

For Turkey’s opposition, which put together its best campaign for three decades, it is back to the drawing board. Speaking at a press conference after the results were confirmed on Monday afternoon, defeated presidential candidate Muharrem Ince said: “Did they [the ruling AK Party] steal votes? Yes, they did. But did they steal 10 million votes? No.”

As the press conference began Mr Ince asked journalists from the state TV broadcaster to leave in an apparent response to its failure to broadcast his major election speeches. He told reporters that the current regime was “a great danger to Turkey”.

While Mr Ince’s CHP remains the largest opposition party in Turkey, winning around 147 seats, it will be bitterly disappointed with failing to take Mr Erdogan to a second round given it put together such a robust campaign.

In what will become one of the most diverse parliaments in years, the Kurdish-focused HDP garnered more than 11 per cent of the vote, which should see it hold 67 seats in parliament.

It’s a remarkable result for a party whose members have been jailed, driven from the country in fear of arrest and frequently branded as terrorists or terrorist supporters by the government and media.

The party’s former co-leader, Selahattin Demirtas, who campaigned from his prison cell in northwest Turkey, where he has been held on charges of terrorist propaganda for the past 20 months, finished third in the presidential race with 8.4 per cent. “The fact that HDP is included in the assembly in these conditions is a great success,” lawyers for Mr Demirtas wrote on his Twitter account.

Western leaders will be concerned to see that the MHP is now the kingmaker in Turkish politics. The extreme nationalist party will not support any attempts at reconciliation with Kurdish separatists, meaning Turkey’s military operations in northern Iraq and Syria are likely to continue.

The MHP’s hold over Mr Erdogan will likely see Turkey continue to forge closer ties with Russia, from whom Ankara is expected to receive delivery of a major missile defence system in the coming months. While under the new executive system Mr Erdogan has unprecedented powers to govern, he won’t want the MHP rocking the boat.

The West can also expect obstacles to enhanced co-operation on the issue of refugees as Mr Erdogan will feel no pressure to bow to demands from Europe.

“He is the only person in charge. There is no one to challenge him,” says the HDP’s Hisyar Ozsoy. “It’s going to be tough.”