Aung San Suu Kyi composed in defence of ‘the indefensible’ 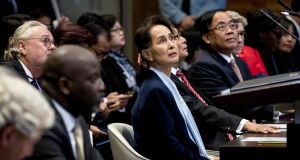 Celebrity or villain? There have been times during the past few days when nobody – the media included – seemed quite sure how to characterise Aung San Suu Kyi, once spoken of in the same hushed tones as Mother Teresa, Nelson Mandela and Mahatma Gandhi.

There has been a perceptible awkwardness as journalists recording her arrival at the International Court of Justice each morning have steeled themselves to shout the obligatory questions: “Are you here to defend the indefensible, Ms Suu Kyi?” and “Will you continue to deny genocide?”

For the Nobel laureate, here to deny allegations that Myanmar’s military committed genocide against minority Rohingya Muslims, one imagines the experience must be equally surreal.

Once accustomed to bathing in the unqualified adoration of the media, each morning in The Hague her routine has been the same: exit the car on the side furthest from the journalists. Walk straight in the imposing main door. Don’t speak. Don’t look back.

Not looking back has become something of a habit for the Oxford-educated politician whose father, General Aung San, was the premier of Burma responsible for bringing about independence from British rule in 1948.

He was assassinated just six months before independence, with the culmination of his life’s work as a revolutionary politician in sight. His daughter, Aung San Suu Kyi, was just two.

Now she is 74, with what once looked like her own life’s work – the defence and promotion of democracy based on the strength of the individual, not the state – already tattered and torn and perhaps facing its coup de grace at the UN court.

As she took to the podium before the 17 judges on Wednesday, she had abandoned her usual colourful appearance for a more toned-down dark blue suit and light scarf.

She appeared composed, though there were times when that calm failed slightly and she seemed flustered for a few seconds – perhaps wondering if her fall from international grace will soon be put beyond doubt by that terrible word “genocide”.

The question, “celebrity or villain?” may be answered for posterity this week, but Aung San Suu Kyi has made abundantly clear in the past that she sees herself as a politician, nothing more, nothing less.