Johnson to warn that tactical voting could put Corbyn into Downing Street, while Labour leader will focus on undecided voters 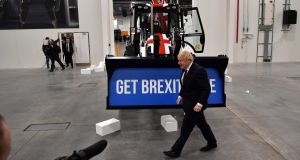 Britain’s party leaders will spend Wednesday campaigning across the country in an effort to drive home their core messages about Brexit, public services and trust in their leadership as voters prepare to go to the polls on Thursday.

Boris Johnson will start the day on a milk round in Yorkshire and end it in Essex with a warning that tactical voting in the general election could put Jeremy Corbyn into Downing Street.

Speaking on Tuesday night, the British prime minister characterised the election as a struggle between the people and politicians who had ignored their priorities and failed to deliver Brexit.

“Tell them that they need to stop squabbling, move the country forward and unleash our potential. There’s only one way to tell them that. And that’s by voting Conservative,” he said.

“Whatever else anyone is offering, what you’ll get is more of the same. A hung parliament delivering nothing but delay, deadlock and more divisive referendums. A lost decade of division, delay and deadlock. Let’s make 2020 about the people of this country and not its politicians.”

Mr Corbyn will focus his message on undecided voters, telling a rally in Middlesbrough that a vote for Labour is a vote for hope and for lower bills and free childcare.

“We will put money in your pocket because you deserve it. The richest and big business will pay for it. We will save our NHS by giving it the money it needs, ending privatisation and by not selling it out to Trump,” he is expected to say.

The Labour leader on Tuesday brushed off a leaked recording of a private phone call in which shadow health secretary Jon Ashworth said he saw no chance of his party winning the election and Mr Corbyn becoming prime minister.

In a call with a Conservative activist he regarded as a friend, which was leaked to the pro-Tory political website Guido Fawkes, Mr Ashworth offered a downbeat assessment of the campaign.

“Outside of the city seats, if you are in small-town midlands and north it’s abysmal out there. They don’t like Johnson but they can’t stand Corbyn, and they think Labour’s blocked Brexit,” he said.

Liberal Democrat leader Jo Swinson will focus in her final campaign speech on Wednesday on Mr Johnson’s character, saying his refusal to look at a picture of a four-year-old boy forced to sleep on a hospital floor showed he was a coward who did not care about others.

David Merritt, whose son Jack (25) was killed by convicted terrorist Usman Khan near London Bridge last month, on Tuesday accused the prime minister of making political capital out of his death. He said the prime minister had not been in touch with him since his son’s death, but had seized what he saw as a political opportunity by using the killing to announce tougher sentences for violent criminals.

1 Leaving Cert: 6,500 students awarded lower grade due to code errors
2 US presidential debate: who won, was it any good, were there any surprises?
3 CPE superbug being detected at record levels, says HSE
4 Dublin needs ‘significant improvement’ in Covid case numbers, Oireachtas committee hears
5 Joe Biden is dodging the culture war to focus on class – and he’s right
Real news has value SUBSCRIBE