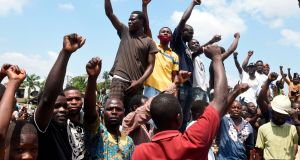 Nigerian president Muhammadu Buhari on Thursday called for an end to street protests in his country, as authorities in Nigeria’s commercial capital Lagos struggled to enforce a curfew imposed to contain anger over a crackdown on anti-police protesters.

Gunshots rang out and smoke rose from at least two fires in Lagos’s affluent Ikoyi neighbourhood on Thursday, witnesses said. A fire broke out in the district’s prison, the state government confirmed. Video footage also showed a blaze in a shopping mall in another part of Lagos.

Violence in Lagos, Africa’s biggest city – where witnesses on Thursday reported seeing young men armed with machetes walking in parts of the city – has escalated since Wednesday. Groups of young men and armed police clashed in some neighbourhoods there following a shooting on Tuesday night in Lekki.

Rights group Amnesty International said soldiers and police killed at least 12 protesters in Lekki and Alausa in Lagos state. The army has denied soldiers were at the sites of the shooting, where people had gathered in defiance of the curfew.

The unrest has become a political crisis for Mr Buhari, a former military leader who came to power at the ballot box in 2015 and is commander-in-chief of the armed forces.

Some protesters have said they fear a return to the dark days of military rule.

Mr Buhari urged youths to “discontinue the street protests and constructively engage government in finding solutions”, in a televised address to the nation that marked his first public statement since the shootings.

The protests against police brutality, which involved nationwide marches for nearly two weeks until the shooting, were largely peaceful. However, people both protesters and authorities said were not demonstrators had begun to carry out acts of vandalism and criminality on the sidelines of the protests.

Several states in southern Nigeria have now imposed curfews after confrontations across the country between security services and protesters against police brutality – the West African nation’s biggest wave of unrest since the end of military rule in 1999.

Mr Buhari also encouraged the international community to “know all facts available” on the situation before rushing to judgment.

Earlier, national security adviser Babagana Monguno, speaking to reporters in the capital Abuja after a meeting with Mr Buhari, said the president had directed all security agencies to operate within “the confines of legality” and “not to do anything that will aggravate the situation”.

“Mr President is very concerned about this development and does not want a situation in which everything breaks down and results in anarchy, in lawlessness and people taking the law into their own hands,” Mr Monguno said.

A Lagos state spokesman said the fire at Ikoyi prison was under control and armed officers were at the scene. He did not say how it started or comment on the reports of gunfire.

Video footage posted online and shown by local media showed a fire at the Circle shopping mall on the Lekki-Epe Expressway. – Reuters