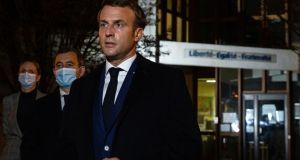 French president Emmanuel Macron has described the beheading of a teacher in Paris as an “Islamist terror attack”.

A French teacher of history and geography was attacked and beheaded on Friday afternoon near the school where he taught at Conflans-Sainte-Honorine, 50km northwest of Paris.

The 47-year-old teacher, identified as Samuel P, had shown cartoons of the Prophet Muhammad in class several days ago.

Police from the anti-crime brigade answered a call about a suspicious individual walking around the school. They saw the suspect, who carried a kitchen knife, before discovering the body.

Police pursued the suspect for several hundred metres. They said he was aggressive and refused to drop his knife. He was shot dead in a quiet residential street in the neighbouring town of Eragny.

The killer posted an image of the victim’s head with the caption “To Macron, the leader of the infidels. I executed one of your hell dogs who dared to insult Mohamed” on Twitter. The account was shut down and authorities asked people not to retransmit the photograph.

The assailant was reportedly a Chechen born in Moscow.

President Emmanuel Macron and prime minister Jean Castex went to the scene of the crime.

“A citizen has been murdered today because he was a teacher and because he taught freedom of expression,” Mr Macron said.

“The whole country stands behind its teachers. Terrorists will not divide France, obscurantism will not win,” he said.

The killing occurred in the midst of the trial of 14 people for aiding and abetting the slaying of 17 people in Paris in January 2015. That three-day spate of violence began at the office of Charlie Hebdo, the satirical newspaper that had printed cartoons of Muhammad, first published in Denmark by the newspaper Jyllandsposten.

It was these cartoons which the slain teacher showed in a class about freedom of expression. He reportedly asked Muslim students to identify themselves and leave the classroom to avoid shocking them. Some parents later complained to the school.

The attack took place just after 5pm near the Collège du Bois d’Aulne, where the teacher worked. The victim was reportedly serious and well-liked by students. There are 750 pupils enrolled in the school, which was until now considered quiet.

The terrorist threat level has been high since the trial opened on September 2nd. On September 25th, a young Pakistani seriously wounded two people with a meat cleaver in front of the former offices of Charlie Hebdo. He said he was motivated by the magazine’s decision to re-publish the Muhammad cartoons on September 1st.

Mr Macron delivered a speech condemning radical Islam on October 2nd. He has repeatedly said that the right to blasphemy must be guaranteed. At least 258 people have been killed by Islamic extremists in France since 2015. – Additional reporting Reuters