‘I will shoot you’: German politicians hit with Covid hate mail 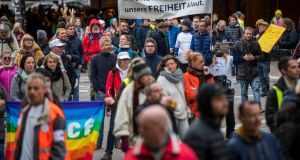 Bavarian state premier Markus Söder is a political pugilist with one of the thickest skins in German politics. But as Germany’s daily Covid-19 infection rate hit five figures on Thursday for the first time, even the 53-year-old Söder is struggling with the corresponding spike in aggression.

For months, German politicians say they have been swamped with hate mail over restrictions introduced to slow the spread of the virus. Now Söder has gone public, quoting from his hate mail in a public address.

“‘I will shoot you, cut you into slices and feed you to the tigers’,” he read from one message. Another voter called him a “dirty, smelly, arrogant, evil, contemptuous maggot and child abuser who’s not worth gunpowder”. A third suggested Söder was a “Jewish swine who deserved to be gassed”.

Pausing for effect, the Bavarian leader – mentioned regularly as a possible contender as Germany’s next chancellor – said he “sometimes has to draw breath” after reading such mails.

“In spite of the attacks we will hold our line as I’m confident we’re acting according to the best knowledge and in good faith,” he said.

Söder’s emails are par for the course, say employees of German politicians who have to read them all. Many had noticed a steady rise in anonymous, aggressive messages in the last years, but no one was prepared for the explosion of naked fury – in emails and phone calls – over Covid-19 restrictions.

A flood of identical emails from organised campaigns followed, accusing MPs who backed restrictions of being “Volksverräter” (traitors to the people), a term forever linked to the Nazi regime.

Another Bundestag MP’s assistant says it is striking that no effort is made to hide identity.

“They feel they have a right to be heard, to insult and attack, and that we are absolute idiots trailing behind the mainstream on corona,” the assistant added.

A decade after Der Spiegel invented a new term – Wutbürger (furious citizen) – to describe growing pockets of protest inside German society, Covid-19 appears to have catalysed uninhibited political debate online which, in turn, has swollen the ranks of a growing army of Wutbürger 2.0 on the streets.

Parallel to a series of large marches against Covid-19 restrictions, German cities have reported 35,000 cases of rule breaches in the six months from March. The fines – mostly for failure to wear a mask where required – have earned local authorities €3 million, but Germany’s police union has warned this week of growing tension on the streets.

Police were called to a supermarket in Saxony after a man who refused to don a mask began swinging an axe. In the western city of Mülheim, meanwhile, a 66-year-old woman hit a 55-year-old man with her car, minutes after he instructed her to put on a mask.

It’s worth pointing out that two-thirds of Germans are still supportive of restrictions, according to a public television poll earlier this month. Meanwhile back at the Green Party parliamentary offices, staff say the tone of protest messages has shifted of late.

“We’re seeing a rise in messages demanding that we, as opposition, do more to control and check the renewal of emergency rules,” said one Green MP political adviser. “That protest is legitimate and much more civilised in tone.”