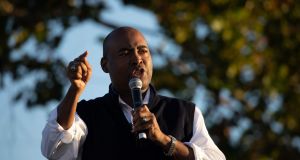 The mist is rising over Lake Murray, a huge reservoir in the centre of South Carolina, on this grey mid-October morning. The lake is a popular amenity for the people of Lexington County and the nearby city of Columbia. It was also the site of one of the biggest nautical events in the country earlier this year.

A “Boats for Trump” event in July saw more than 1,500 vessels take to the reservoir’s water in a display of support for the Republican president. With skydivers trailing Trump signs, and crafts proudly flying Trump-Pence flags, the display of pageantry during this gathering was an indication of the commitment to the US president felt by many in this part of the country.

Though South Carolina has witnessed some of the demographic changes that are shifting the political colour of nearby states such as North Carolina, this is still a conservative state in the Deep South.

Donald Trump won South Carolina comfortably by 16 percentage points in 2016, though Democrats are hoping that a substantial black vote could help their chances there this time around. After all, Joe Biden’s popularity among black voters in South Carolina secured the state for him in the Democratic primary in February, propelling him to the party’s presidential nomination.

Nonetheless, while South Carolina is expected to vote to return Donald Trump to the White House on November 3rd, a Senate race here has become one of the closely watched contests of this election cycle.

Democratic candidate Jaime Harrison is hoping to become the party’s first senator in 22 years to be elected in South Carolina. He is taking on Lindsey Graham, a Republican pillar of the Senate who hopes voters will return him to Washington for a fourth term.

Mr Graham is one of an expanded group of senators who have rowed in behind Donald Trump despite initially denouncing him when he sought the Republican nomination for the presidency five years ago. “A race-baiting, xenophobic, religious bigot,” he said of the then-prospective candidate Trump in 2015. “If we don’t reject Donald Trump, we’ve lost the moral authority [...] to govern this great nation.”

Now Mr Graham is one of Mr Trump’s closest allies on Capitol Hill and a regular golf buddy of the president.

Mr Graham’s political journey captures the challenge facing many Republicans running for re-election in states where Mr Trump is popular. Like Thom Tillis, who is defending his Senate seat in neighbouring North Carolina, Mr Graham has honed his pro-Trump credentials as election day has neared.

Though once a relative centrist – he was a close friend of the late John McCain, with whom he shared more moderate Republican views – he has moved further to the right as the Trump presidency progressed.

Bob Oldendick, professor of political science at the University of South Carolina, says many conservative voters in the state are suspicious of Graham’s political credentials. “Some people question if he is really a true conservative, and where he really stands on Trump,” he says, noting Graham’s more progressive stance on climate change in the early part of his career and his previous comments about Mr Trump.

In this regard, Mr Graham faces a potentially career-ending conundrum – he may have thrown his lot in with Trump too late to win over sceptical conservatives; simultaneously, his embrace of the president is likely to alienate middle-ground and independent voters.

It is against this background that Jaime Harrison has emerged as a formidable challenger to 65-year-old Graham. The 44-year-old lawyer, who was the first black chairman of the South Carolina Democratic Party, has a compelling story. Raised by a single mother and his grandparents in Orangeburg, South Carolina, he studied law at Yale and Georgetown University, before building a successful career in politics and consulting.

“From a mobile home to Yale University and Georgetown Law, Jaime never forgot who he was or where he came from,” his campaign literature says. It’s a message that’s resonating.

Barack Obama is the latest prominent figure to have backed the Democratic candidate, in an ad released this week. “If you want a senator that will fight for criminal justice reform, lower college costs, and to make healthcare affordable, you’ve got to vote for my friend, Jaime Harrison,” said the former president. “This is the biggest election of our lifetime, and I know a thing or two about big elections.”

Figures from the Federal Election Commission show that Mr Harrison raised an astonishing $57 million in the third quarter – the most ever raised by a Senate candidate in that timeframe.

The fundraising haul has invited comparisons with Beto O’Rourke, the former congressman and Texas Senate candidate who previously held that record. But O’Rourke’s story is also a cautionary tale. Despite the huge energy surrounding his campaign it was not enough to dislodge Ted Cruz in the Texas Senate race in 2018.

Much of O’Rourke’s financial support in that race came from outside Texas, and a similar trend underpins Mr Harrison’s massive fundraising haul, raising questions about whether the level of money he is attracting really reflects the appetite of voters in South Carolina.

At the state Democratic Party headquarters in Columbia, officials and volunteers express confidence that Mr Harrison will get it over the line.

Party official Lauren Brown says the campaign is not concerned that much of the money raised has been from out of state. “Not at all. A lot of campaigns receive national funding, especially when they’re high profile, and that’s not at odds with our election practices or any of our campaign financing laws.”

She says Mr Harrison and the party have “done the work”, also noting the huge uptick in early voting that has seen turnout in South Carolina up 116 per cent compared with the same period in 2016. “The voters of South Carolina are no longer interested in having Lindsey Graham serve as their senator,” she says.

Despite the perception that Donald Trump is dominating this election cycle, she believes he is not the motivating factor for most voters in the state. “We’re in a pandemic. South Carolina typically ranks 48th in the country when it comes to education. These are live issues for people, so if you’re looking at the lack of leadership in Washington, you can certainly start at the top with the president, but I think people expect more from their local and state elected leaders on these issues and they’re not getting it.”

Recent polls, however, show that Mr Graham may be able to ride out the unexpectedly strong challenge from Mr Harrison. While the Real Clear Politics average of polls has the race as a toss-up, a New York Times-Siena College poll taken last week had Mr Graham six points ahead.

Mr Graham has himself admitted that his fundraising chest has been dwarfed by that of Mr Harrison, telling Fox News host Sean Hannity this month that he was being “killed financially” in his home state.

This week Mr Graham took aim at ActBlue, the Democrat-focused online fundraising platform through which Mr Harrison and other candidates receive small, individual donations, calling for the sources of those donations to be investigated.

Prof Oldendick says Mr Graham, as chairman of the Senate judiciary committee, may have been helped by the coverage given to the confirmation hearings for Donald Trump’s supreme court nominee Amy Coney Barrett.

“The Barrett hearings have been a boost to senator Graham. Firstly, because of his role as chair of the committee he has been able to get publicity. It has shown him doing his job and being senatorial, so to speak. Also, the nomination has brought the issue of conservative judges and the federal judiciary to the forefront,” he says.

“This was an important issue for Republican voters in 2016, not just here in South Carolina but across the country. The Barrett hearings are a reminder to people of how many conservative judges and justices have been confirmed, and Graham’s role in getting that job done.”

Here in Lexington, however, Harrison is the name on everyone’s lips, despite the fact that this county voted for Donald Trump by two to one in 2016. Reflecting the huge sums of money ploughed into the Democrat’s campaign, ads are blanketing local airwaves and newspapers. First-time voter Brooke Fredette (20) says she first heard about Mr Harrison about seven months ago, and likes what he stands for.

“He’s definitely the candidate who most aligns with what I believe in – he’s not super-left or super-right. I think that’s what folks like around here,” she says. “Most importantly, I think he actually cares about the community.” For Graham, the election on November 3rd could prove to be the most important of his political career.