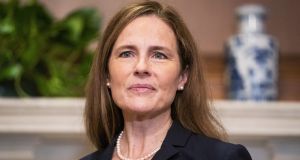 Amy Coney Barrett moved one step closer to joining the US supreme court on Thursday when the Senate judiciary committee approved her nomination. Her approval by the 22-member committee paves the way for a vote on Monday by the full Senate.

Democrats boycotted the vote, refusing to take part in the ballot on Thursday morning. But the 12 Republicans on the committee voted to confirm the 48-year-old judge, clearing a key procedural hurdle in her confirmation journey.

In their vacant seats in the committee rooms during the vote, Democratic senators placed large posters of people they claim will be affected by changes to healthcare.

They argued during last week’s confirmation hearings that if Ms Barrett were confirmed, the future of the Affordable Care Act would be in doubt, given that the country’s highest court is due to begin hearing arguments in a case related to the landmark healthcare law introduced by President Barack Obama a week after the election.

But Senate judiciary committee chairman Lindsey Graham delivered a glowing verdict on Ms Barrett’s suitability for the court. “I’ve been here for a while, and I’ve never seen anyone more capable than Judge Barrett on the law,” he said.

As he faces his own tough re-election battle in the senate race in South Carolina, he added: “This is why we all run ... It’s moments like this that make everything you go through matter.”

The Republican-controlled Senate is expected to have the votes to confirm Ms Barrett’s appointment to the court next week, a little over a week before the presidential election.

Ahead of that vote, senator Chris Murphy of Connecticut said “this rushed political process has been illegitimate from the start” and accused Republicans of wanting to undermine access to healthcare for millions of Americans.

In a separate vote the judiciary committee decided to subpoena the chief executives of Facebook and Twitter to appear before the committee. It follows outrage by many Republicans last week over the social media platforms’ decision to limit the sharing of a New York Post article about Hunter Biden, the son of Democratic nominee Joe Biden.

Meanwhile, ahead of last night’s presidential debate in Nashville, President Donald Trump followed through with his threat to release his interview with 60 Minutes host Lesley Stahl, claiming that the interviewer displayed “bias, hatred and rudeness”. But the interview, which is due to air on Sunday, instead showed Stahl calmly posing questions to the president as the latter grew increasingly irritated.

CBS had said the White House had recorded the video for archival purposes, but the administration appeared to have broken the terms of the interview by posting a 38-minute clip on the president’s Facebook page.

Separately, CBS released excerpts of an interview with Mr Biden, which is also due to air on Sunday. Asked about his views on expanding or “packing” the supreme court – a concept that many on the left of the Democratic party favour – Mr Biden said he would establish a bipartisan committee to consider this and other issues if elected. The former vice-president previously signalled his opposition to the idea.

Meanwhile, Mr Trump claimed that former president Barack Obama, who held his first campaign event for Mr Biden on Wednesday night in Philadelphia, was “campaigning for us”.

“Every time he speaks, people come over to our side. He didn’t even want to endorse Sleepy Joe. Did so long after primaries were over!” he tweeted. In fact, polls show that Mr Obama remains highly popular among Democratic voters and the public at large.